Written by Night For Vets on January 23, 2019. Posted in Gone But Not Forgotten 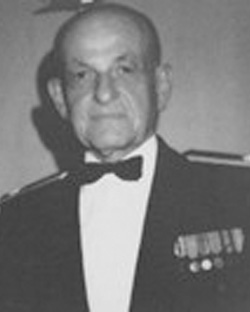 George M. Epperson, 100, passed away on January 8, 2019 after a memorable life. He was born May 22, 1918 in Klamath Falls, OR to Alice & Arthur Epperson, where he lived most of his youth. He attended Oregon State University and was a member of the Theta Chi Fraternity. While there he met his future wife of over 54 years, Phyllis Otto, who preceded him in death in November 2006, and were married New Year’s Eve 1942 in Harrisburg, PA.

At the start of World War II he left the University to enlist in the Army Air Corp and commissioned a Second Lieutenant in April 1942. During the war, George served his country in several capacities and locations including the P-38 fighter group based in Glendale, CA, and notably in England with the 8th Air Force in 1944-45 with the 65th Fighter Wing as Assistant Wing Intelligence Officer where his duties included photo reconnaissance of allied bombing. He also was assigned the duties of Trail Judge Advocate in the General Court and remained in England after VE day. Following the end of World War II, George returned to Oregon State University and graduated on the grand honor role with a BS degree in General Science. In July 1946, he received a regular commission as a First Lieutenant in the Army Air Corps which later became the U.S. Air Force. Upon his commission, his duties in security and intelligence assignments sent him to bases in Florida, Colorado, and Ohio and was promoted to Captain. In 1949 he returned to England as Deputy Assistant Chief of Staff, Intelligence HQ with the 8th Air Force in London. In 1952 he returned to the US and was assigned to HQ, Strategic Air Command at Offutt AFB in Nebraska as Chief, Soviet Air Force Branch Directorate of Intelligence. George also attended the Air Force Command and Staff College, Maxwell AFB in Alabama and served on the staff for 3 years including Intelligence Officer to the commander. In 1958 he was sent to serve as Senior Intelligence Advisor to the Republic of Korea Air Force. Upon his return, in 1960 he was assigned to the Air Force Intelligence Center in Washington DC and then the Pentagon as Executive Officer, Directorate Director Defense Intelligence Agency. His involvement in air reconnaissance photography and intelligence led to his writing an article about Soviet nuclear missile capabilities and the review of Cuban missile installations which included visits to the White House. In 1964 George was assigned as Intelligence and Security Inspector with the Office of the Inspector General at Norton AFB which took him to bases all over the globe. He retired as a Lt. Colonel from active duty in 1968 after serving his country for over 26 years.

His service to his country led him to visit many places and meet many notable people. George was then employed with the Riverside Air Pollution Control District as Director of enforcement. In 1982 he joined the staff of the Retiree Activities Office at March AFB and was appointed Director of that office and held that position representing approximately 50,000 retirees and their families for over 25 years as a volunteer. He received the David Goldware Friend of the Veteran award from the Riverside Board of Directors in 2007. George was also made an honorary Colonel by the March AFB commander. He was a member of the Masonic Lodge for over 60 years, the P-38 National Association, the Eight Air Force Historical Society where he served as President of the Southern California chapter, and a member of the Railway Locomotive Historical Society. George’s train interests included building model railroads from scratch on his lathe and riding in the cab of a steam or diesel locomotive whenever he got the opportunity. His involvement in his son’s scouting activities took him on many backpacking trips including being a Scoutmaster and Merit Badge Counselor.