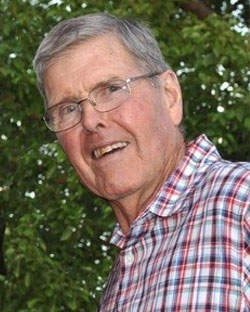 January 6, 1937 – November 3, 2022 George Jorritsma, age 85, of Calimesa passed away peacefully at home on November 3, 2022. George was born January 6, 1937, in Downey, California, to Siebren (Sam) and Ann Jorritsma. When George was 3 years old, the family moved to El Cajon, California where Sam had bought a small dairy. Three years later, Sam built a new dairy in Santee, California where George spent the rest of his youth. George graduated from Grossmont High School at age 16, the result of having been promoted in elementary school not once but twice. He attended Calvin College in Grand Rapids, Michigan for two years after which he returned to California and attended Cal Poly San Luis Obispo majoring in dairy husbandry. Upon finishing college, George had intended to work for his father on the dairy, but Uncle Sam had other plans. He was drafted in 1957 and served in the Army for two years. George went through basic training at Fort Ord and wound up with orders sending him to New York to serve in the 1st US Army Veterinary Food Inspection Unit inspecting cheese. With ten months left of service, George returned to San Diego on leave to marry Marvalee (Johnson) on November 18, 1958, the love of his life who he had met at church youth group. Having to borrow $300 from his mom to get back to New York, he and Marvalee finished his term of service and returned to California in 1959. After the service, George had every intention of getting into the dairy business, but as it turned out, the dairies he had been looking at folded before he could purchase any of them. Meanwhile, his brother-in-law mentioned he had found a chicken ranch for sale in Calimesa, which George and Marvalee purchased in 1960. With three acres and 6,000 chickens, things were looking up until 1972 when the government informed them their chickens were infected with Newcastle’s disease and had to be destroyed. In the ensuing years George decided to pivot and started a small retail nursery, then a landscape company and finished his work career as a wholesale nurseryman. George had tremendous creativity evidenced by many DIY inventions designed to make the job easier, a green thumb and intricate woodcarvings of birds which grace the shelves of his home. Golf also became a passion of his later in life. He was not known for the long drive but was always straight down the middle of the fairway. George was active on the South Mesa Water Company board where he served as General Manager and Board President for over 50 years. His passion for the water business helped solidly position the agency for the future. He was well known in the community, always willing to lend a helping hand. He was also passionate about Christian education, sending his four children to Redlands Christian School and Calvin College as well as serving on the board of Redlands Christian Schools for collectively over 20 years. At the River Christian Reformed Church, where George and Marvalee attended for nearly five decades, most of the congregants who entered the sanctuary were greeted by smiling faces and warm hugs as they served as greeters for many years. George also loved to sing from the pews and was regularly seen shadow conducting as songs were sung. He and Marvalee were active in small groups where deep relationships were formed and ministry happened as joys, sorrows and some traveling was shared. He will be remembered for his hospitality, generosity, creativity, boisterous singing, love for his family, love for Jesus and the legacy of faith he leaves his family. George preached the Gospel at all times, mostly through his actions and sometimes used words. We take great comfort in knowing that he now joins the great cloud of witnesses of those who preceded him in death; namely, his parents, Sam and Ann; sister, Jacoba “Cobi” Hofman; brothers-in-law Tymen Hofman, Ed Van Grouw and Harm Tjaarda; sister-in-law, Janice Silvernail and grandson, Harrison Prins. He is survived by: Marvalee, his loving wife of 63 years; his children, Sandi (Paul) Wagner of Yucaipa, Deb (Bruce) Prins of Calimesa, Doug (Renee) Jorritsma of Redlands and Mike (Donna) Jorritsma of Holland, MI.; grandchildren, Gerrit (Erin) Wagner, Jessica Wagner, Cooper Wagner, Mitchell Prins, Cameron Prins, Clara Prins, Austin (Casey) Jorritsma, Tanner (Jamie) Jorritsma, Sierra (Mitchell) Hoezee, Hannah (Taylor) Pruis, Luke (Katy) Jorritsma and Jordan Jorritsma; great grandchildren Noah and Hollyn Wagner.