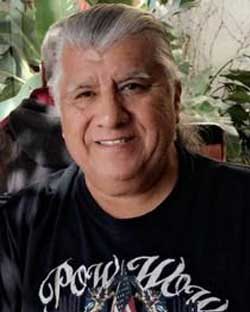 November 4, 1947 – August 21, 2021 George Charles Morales passed away on August 21, 2021 at Riverside Community Hospital. George was born November 4, 1947 in Los Angeles, California to Mary Louise and Leo Morales. He grew up in Norco, California and later moved to Riverside, California where he graduated from Poly High School. George entered the Army in 1968 where he served in Vietnam. Soon after being discharged he married Molly Rebecca Hart. Together they raised five children. George entered the Riverside Police Academy in 1972. Upon graduation from the Academy, he worked for the San Bernardino and Beaumont Police Departments. Later he joined the Marshall’s Office and the Riverside County Sheriff’s Department where he was a Deputy and Bailiff until his retirement. He enjoyed dancing and was an avid salsa dancer. He enjoyed going to Pow Wows and was a collector of Indian jewelry and art. He had a love for sports and coached his wife’s softball team for a number of years. He also enjoyed watching professional sports with family and friends. George loved gardening with his granddaughter, Rebecca. George is survived by his son, George Theodore Morales; four stepchildren, Kim Ortega, Scott Hart, Sean Hart and Frances Hart; two grandchildren, Rebecca Rose Morales and Alex Baltierra; one great-grandchild, Julianna Baltierra; and two sisters, Lilliana Kelly and Adeline Logsdon and numerous nieces and nephews.