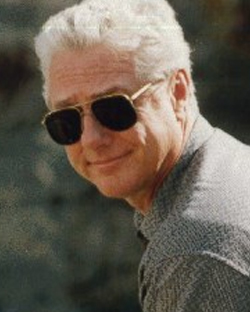 George Wilson, age 83, of Highland, CA, passed away on September 2, 2022. George is survived by his wife of 61 years, Carolyn; son, Christopher, his wife Angela and their children Ben and Karlie; and sisters Candy (Seaside, CA), Lenda Carol (West Linn, OR), and Diana Jane (Seattle, WA). George graduated from San Bernardino High School in 1957, then went on to USC where he graduated with a Bachelor’s degree in finance. George also attended the Insurance Institute of America and received designation as Accredited Advisor in Insurance (AAI). After graduating from USC, George joined the United States Air Force where he served in active duty in various commands and capacities, including one year as a pilot advisor in the Vietnamese Air Force. Some of George’s decorations include the Bronze Star Medal and the Air Medal with four oak leaf clusters. George was honorably discharged from active duty with the rank of Captain. George served as a past President for the Rotary Club of San Bernardino, the Highland Area Chamber of Commerce and the Independent Insurance Agents Assn. (Inland Empire Chapter). He also worked at Valley Bank, where he was a member of the Board of Directors and was a member of the executive committee and chairman of the audit committee. George resigned in 1985 to assume management of the head office. He also served on the Board of Directors for the East Valley Water District. Some of the other commission and study groups George served on include: the Highland Area Municipal Advisory Council and the Local Agency Formation Commission Committee on San Bernardino/ Highland Service Boundaries and annexation. Other memberships include The Order of Daedalians, the Veterans of Foreign Wars, the American Legion, the Reserve Officers Association and the Distinguished Flying Cross Society. George had many personal interests including trap and skeet shooting, flying (possessed commercial pilot’s license with instrument, DC-3 and certified flight instructor ratings), model railroading and an occasional round of golf.