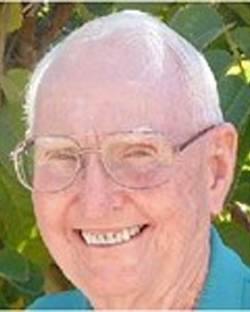 Gerald Francis Burke passed away peacefully at home in Paso Robles, CA, on June 10, 2019, at the age of 98. Born in Burley, ID, in 1921 to Robert and Mary Head Burke, Gerald—known to many as Jerry—was married to Mary Mitchell Burke from February 7, 1942, until her death in 2011. He is survived by two children, Teresa Ellen Burke, and her husband John Kinnear, of Atascadero, CA; and Michael James Burke, and his wife Bernadette Marian Burke, of Williamsburg, MA; he was predeceased by three other children, John Patrick Burke of Seattle, WA; Mary Frances Burke Riggs of Newbury Park, CA; and Robert Mitchell Burke of Riverside, CA. Jerry is also survived by nine grandchildren, Thomas Burke, of Washington, DC; David Burke, of Carmichael, CA; Catherine Riggs, of Newbury Park, CA; Jennifer Riggs, of Altadena, CA; Brian Riggs, of Berkeley, CA; David Riggs, of Santa Monica, CA; Emma Burke, of Sunderland, MA; Isaac Burke, of Brooklyn, NY; Stanley Kinnear, of Spanaway, WA; and by 13 great-grandchildren.

Jerry grew up on a farm in Burley, ID, and attended what was then the University of Idaho, Southern Branch (now Idaho State University), where he studied journalism and met his wife Mary. He served in the U.S. Army in World War II in Europe, attaining the rank of first lieutenant and serving in the Corps of Engineers in England, France, and Germany. At war’s end he returned to the United States and took up residence in Riverside, CA, where he and Mary raised their five children and lived for many years before moving to Paso Robles in 2008.

After working as a landscaper and at various other jobs immediately after the war, Jerry began what would become a long career with W. Atlee Burpee & Co. (Burpee Seeds), eventually rising to become a company vice president and manager of Burpee’s West Coast branch in Riverside. Upon retirement from Burpee he took a position with Bodger Seeds in El Monte, CA, then retired from the seed business and began to write about gardening, RV camping, and travel. His columns and articles, including his regular gardening column, "Flower Power," appeared in the Riverside Press-Enterprise, San Bernardino Sun, and San Diego Union, and his travel and gardening articles were published in the Los Angeles Times and many other newspapers and magazines. In addition, he wrote stories and poetry that appeared in a number of publications.

Jerry loved his wife Mary, his children, grandchildren, and great-grandchildren, and enjoyed spending time with family. He also loved gardening, especially flowers, and traveling with Mary in their various motorhomes (after many years of tent camping with kids and dogs). In later years he enjoyed reading, writing, watching sports on TV, and taking walks and watching—and feeding—birds.