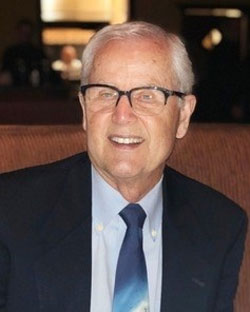 Gerald “Jerry” George Kasinski, 77, of Redlands, CA, passed away peacefully on Friday, October 14, 2022 after a three-year battle with vascular dementia. He was lovingly surrounded by family at the time of his death. Born on September 2, 1945 in Buffalo, NY (Go Bills!), Jerry was the third of four children born to Walter and Leokadja “Lottie” Kasinski. After earning his Philosophy and Theology majors from Buffalo Seminary, Jerry enlisted in the Air Force and served in the Vietnam War. In 1971 he settled in California to raise a family and pursue a 37-year career as an Elementary school educator, Vice Principal, and Principal in Riverside and San Bernardino City Unified Schools. Jerry obtained his Master of Arts in Education, Educational Administration, from the University of Redlands in 1990. Jerry enjoyed being involved in his communities as he served as President of the San Bernardino Breakfast Rotary Club and President of the Redlands Dearborn Grove HOA for several years. He was well-respected for his thoughtfulness, integrity, honesty, and his ability to find humor in everyday life. Even in the end, his humor was the shining light that carried us all. He will be deeply missed. Jerry is survived by his loving wife, Helenruth Kasinski; son Philip (Amy) Kasinski; daughter Krysta Kasinski (Sushant Kamath); step-daughter Chesley (Robert) Schamroth; 5 grandchildren; his brothers James Kasinski and William (Jean) Kasinski; his sister Madeline Harris; and many nieces, nephews, cousins, aunts and uncles. He was preceded in death by his parents, Walter and Lottie.