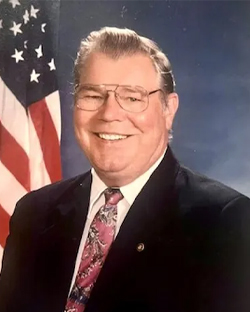 Born in Detroit, Michigan on February 14, 1940, Master Sergeant Gerald “Jerry” Pisha, USAF, Retired, passed away at the age of 82 on Thursday, March 24, 2022 in Desert Hot Springs, CA. Jerry served 23 years in the United States Air Force and spent 19 of those years as a chef aboard Air Force One delighting 5 presidents with his delicious cuisine. He retired in 1980 and moved to Desert Hot Springs where he worked for the postal service as supervisor and post master. Jerry was an active member of the VFW, American Legion, the Moose Lodge, and the Elk’s Lodge for many years. He served as Exalted Ruler of the Elks and cooked delicious meals there and at other organizations for hundreds of people. Jerry also served as the mayor of Desert Hot Springs from 1993-1998 and actively pursued the development of the Desert Hot Springs Police Department and was responsible for the procurement and preservation of Cabot’s Pueblo Museum.

Jerry is survived by his three children, David Hulstine, Valerie Teichert, and Barbara Pisha-Cruz. Nadeen Pisha, Jerry’s wife of 50 years, passed in July of 2016. Jerry will be laid to rest alongside her at The Riverside National Cemetery.

A loving husband, father, grandfather, brother, and friend, Jerry will be greatly missed by all.