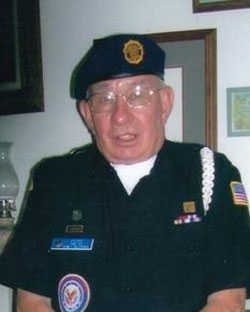 Glen Roy Kemp, age 82, of Hemet, California, passed away on Wednesday, July 15, 2020, from a pulmonary medical issue he had for many years. He was born in Banner County, Nebraska to his late parents, Edward and Mattie Kemp. He was married to Linda Kemp for 4 years, but they started dating 8 years ago, after meeting at the American Legion Post 53 Tuesday Night BINGO. Glen grew up on a farm in Nebraska and was involved with 4-H Club, ROTC, and the Army National Guard at McGrew High School. After graduating from McGrew High School, Glen joined the U.S. Navy, serving from 1957-1961, where he became a Machinist Mate-3rd Class. Glen proudly volunteered at the Hemet American Legion, Post 53, along with serving on their Honor Guard and was also their Chaplain for many years. Glen worked at Smith Tool as a machinist for many years, he also worked at Stanford Stations Inc. as a Station manager, but Glen thoroughly enjoyed his last job at the Moreno Valley School District as a head custodian for 15 years before retiring. Glen was a conservative Baptist and read his bible daily. He would read the entire bible each and every year. Glen was a family man who loved spending time with his many grandchildren and great grandchildren. He also enjoyed fishing ever since he was a lad and loved gardening, walking through museums, camping, square dancing, and country music. Glen was able to travel/vacation to many places including Australia, Alaska, Philippines, and Hawaii just to name a few. One of his most memorable trips was the one he took to a Mission in Mexico. Glen also enjoyed his annual USS Lyman K Swenson, DD729 ship reunions. Glen will be missed greatly by his family and many friends. Glen is survived by his wife, Linda Kemp; 4 daughters: Juli Danner, Teri Gaudreau, Sandra Lujuan, and Crystal Kent; 2 sons: Dennis Kalinowski Jr., and Jeromy Kalinowski; 1 brother: Vernon Kemp, 16 grandchildren, and 18 great grandchildren.