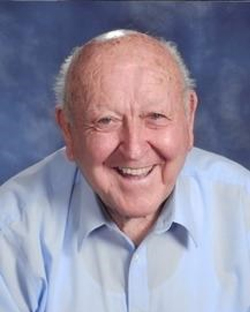 Glenn Wyne (age 99) was born September 19, 1921, in El Monte, California to Esta Myrrle and Diantha Ruth Durfee Wyne. Glenn attended Temple Grammar School in El Monte and graduated from El Monte High School before attending and graduating from Whittier College as a chemistry major in 1942. He married his high school sweetheart, Doris Stanton, August 1, 1942 in a double wedding ceremony with his brother Jay and Doris’ twin sister, Dorothy. Shortly afterward Glenn joined the Navy and served in the South Pacific during World War II, earning many honors including the Bronze Star Medal for heroic service. In 1946, following the war, Glenn and Doris moved to Corona, California, where he was employed as a chemist for Sunkist Lemon Products. They lived in Corona until 2005 when they moved to Atwater, California, where he resided with his daughter and her husband. It was there that Glenn passed away peacefully on July 31, 2021 just short of his 100th birthday. While living in Corona, Glenn was an active member of the community and the First Congregational Church. He was an avid golfer, bridge player and Dodger fan. Even while working for Sunkist he enjoyed farming activities including raising avocados and Christmas trees. After retiring from Sunkist in 1984, he spent many years volunteering at Peppermint Ridge. Glenn was preceded in death by his parents, Esta and Diantha Ruth Wyne, and brother and sister-in-law, Jay and Dorothy Wyne. He is survived by his brother Gene (Margaret) Wyne of Santa Rosa, CA; his sons, Chris (Sarah) Wyne of Raleigh, N.C. and Tom (Debbie) Wyne of Missouri City, TX; his daughter Anita (Greg) Bell of Atwater, CA; eight grandchildren and fourteen great-grandchildren.