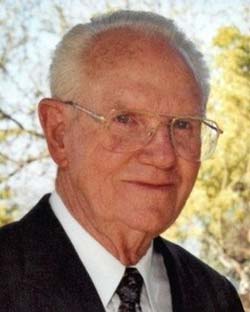 Gordon Ayers passed away on February 3, 2021 at the age of 98 in Ontario, CA. He was born December 13, 1922 in Ontario, CA and was a lifelong resident of the local area. He was a graduate of Chaffey High School, Chaffey Junior College, and the Fred Archer School of Photography. In 1939, Gordon met the love of his life and wife of 67 years, Shirley (fondly referred to as “Trink”). In 1942, he joined the Army Coast Artillery and was soon transferred to the Army Air Force at March AFB in Riverside, CA. Gordon and Shirley married in 1943 and 11 days later Gordon was called to service in the Pacific Theater, moving from island to island where he was responsible for processing aerial film of bombing runs for analysis. This is where his lifelong love of photography began. He returned home in 1945 and was Honorably Discharged. In 1948, Gordon and Shirley opened a small portrait studio in Ontario where Gordon also did wedding and commercial photography. In 1949, they started raising a family and were blessed with daughters Lynda and Judy. In 1954, he opened Gordon Ayers Camera Shop. Business grew and eventually he operated four camera stores and a processing lab, all in the surrounding communities. Gordon Ayers Camera Shoppes were well known and respected along with his popular photo classes. He retired in 1980, selling all the stores. Gordon was an active member of Westminster Presbyterian Church in Ontario. He was past president of the Ontario Optimist Club and served on the boards for the Salvation Army and San Antonio Community Hospital. He devoted much time to community service and helping others. He was also an avid and accomplished gardener and could make anything grow. Gordon was loved and respected by everyone who knew him. Gordon loved his Lord and Savior, Jesus Christ and lived a life of faith and service to Him. Gordon is survived by his daughter Lynda (Dave) Laycock, four grandchildren: Jan (Eric) Jin, Ali (Kevin) Kruze, Eric (Kara) Laycock, and Kevin (Teresa) Laycock; eight great grandchildren; and many cousins, nieces, and nephews. He was preceded in death by his wife, Shirley; daughter, Judy Hayden Ayers; granddaughter, Michelle Laycock; father, Oscar; mother, Lunar; brother, Oscar; and sisters, Dorothy Besselman, June Ruff Henderson, and Barbara Fleming. Memorial contributions can be made to Westminster Presbyterian Church in Ontario.