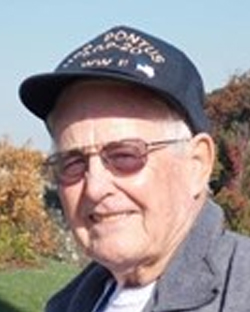 Gordon Martens "Gordy", 92, of Hemet, CA, passed away on December 30, 2019, in Lake Havasu City, Arizona. Gordon was born, January 9, 1927 in Dansville, New York, to Maurice and Bernice Martens of Canaseraga, New York. In 1934, his family moved to Southern California, eventually settling in San Dimas, California. In 1944 Gordon enlisted in the Navy. He served in WWII aboard the PT boat USS Pontus, as a torpedo man. On July 6, 1946 he married the love of his life, Beverly Jean (Rury) Martens. Together they raised 5 children, Glenda, Vickie, Craig, Karen, and Gina. In 1982, he retired from the Metropolitan Water District at Lake Skinner as a survey supervisor. Gordon loved being outdoors, fishing, hunting, camping and spending time with his children, grandchildren and great grandchildren.