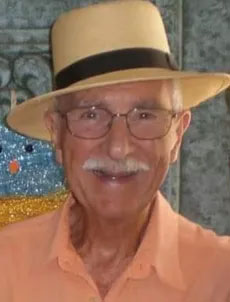 1932-2022 Gordon Parr, a two-decade resident of Palm Springs, died in the early hours of December 9. He was 90 years old. Gordon Frederick Parr was born April 28, 1932, in New Baltimore, Michigan, the oldest child of Gordon William Parr, born an Anglo Canadian, and Susan Parr, who was of Rumanian descent. Both parents became Methodist ministers. Young Gordon attended Michigan State before being drafted. After his 2-year stint in the army. he moved to Westwood, completing his studies and eventually graduating from UCLA. He married marJorie Friend in 1960, legally adopting her son shortly after. They spent most of their life together in San Rafael (bay area) where Gordon was a stockbroker. He retired in 2001 and moved to Palm Springs. Not finding a band to compatible with his trombone, he founded one of his own at Mizell Center, Gordon Parr and the Dixiecats. Beside his love of all music, including opera, he was crazy about sports, focusing on one at a time. He was early on a volleyball enthusiast, then a golfer, a long distance bicyclist (in hilly Marin County), a marathon runner, and lastly a tennis player. Blessed with an arresting baritone voice, he fit barbershop singing into his agenda. Ever the multitasker, he liked to cook. Friends applauded his boeuf bourguignon. He appreciated art, too – Pierre Bonnard was a favorite. His preferred pets: cats. During his time in the desert, photography became more than a hobby. He partnered with his journalist wife in illustrating feature stories. It has to be mentioned that Gordon was strikingly good looking. When young he was darkly handsome like a movie star. Though not unaware that he attracted attention, he ignored it. Integrity was his other gift. His younger brother, John Wesley Parr, died many years ago; Gordon’s son, Donald Frederick Parr, died last year. Survivors are his sister and brother-in-law. Gail Parr-Forgacs and Steven Forgacs, who live in Florida, and his wife, Jorie Parr.