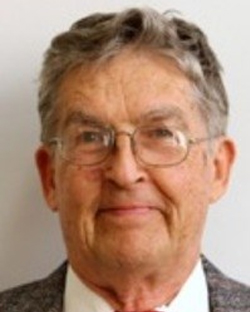 Gordon Power MD died peacefully in his sleep on January 8, 2021 of complications of COVID-19 at his home in Redlands. He was 85 years young. Gordon was born in the Depression era in Baltimore, Maryland the first of five children to Ethel and Gordon Power, Sr. He attended public high school and Swarthmore College, graduating with Honors in Biology while working to support himself shearing sheep at $0.50 per head. At Swarthmore, he met Peggy Condon who was to be his wife. He attended University of Pennsylvania Medical School working as a dispatcher for a fuel oil company at night. He then interned at Philadelphia General Hospital, a formative year in his life, followed by residency in Internal Medicine and a Fellowship in pulmonary physiology. He served three years in the Army Medical Corps in the late 1960s and came to prefer research to clinical practice. He turned down positions at Harvard and UCLA and came to Loma Linda University on a smoggy fall day in 1969. With support from the NIH he studied many aspects of perinatal biology and published more than 180 scientific research papers. He was generous in supporting other investigators at LLU and around the world and hosted numerous international research fellows in Obstetrics from Japan. He loved teaching young investigators how to think and do research. Outside the lab, he liked tennis, jogging, reproducing antique furniture, copying Old Masters art, sculpture, building stone walls and other full-scale construction work. Some of his projects included a BD-5 light plane, a backyard bomb-shelter, and an architecturally adventurous home in Oak Glen which showcases many of his diverse art pieces. He was an absolutely voracious reader and a life-long student. At the time of his death his nightstand was piled high with novels, grant applications under review, and Great Courses DVDs spanning topics from statistics, quantum physics, history, and theology. He and Peggy traveled the world on freighter ships and were masters of Cryptic-Crosswords, doing the LA Times crossword puzzles in ink. He loved his wife Peggy dearly for the 56 years of their marriage. He lost both Peggy and his eldest son Ronald to cancer 5 years ago as well as his brother John Gilbert Power. He is survived by three of his siblings Garrett Power, Steve Power and Vallie Larson and his two daughters, Tracy Mack of Calimesa, and Laurie McNaughton of Redlands and his 8 adored grandchildren, with a great grandchild on the way. He believed in the Quaker tenets of nonviolence and the good in every man. He felt the road got a bit steep at the end, but felt much gratitude to all those who helped along the way.