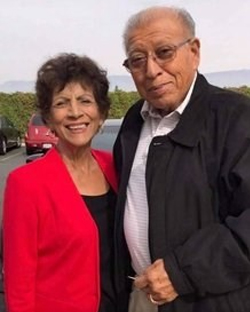 It is with a heavy heart that we share the passing of Gregorio S. Rodriguez, on June 15, 2020 at the age of 86. Gregorio (Goyo) passed away peacefully, with his wife and family by his side at his home in Colton, California. Goyo was born in Colton to Francis and Gregorio Rodriguez. He graduated from Colton High School, played and lettered in varsity baseball. Following high school, he enlisted in the Army and was stationed at Fort Bragg, North Carolina – 82nd Airborne Division. Goyo recorded 19 jumps as a United States Paratrooper. After being honorably discharged from the Army he married the love of his life, Annie; and together raised five children. Goyo and Annie loved to travel, visiting six of the seven continents, casinos, and enjoyed dancing. In his spare time Goyo was on several bowling leagues, and on 5 different occasions he bowled a perfect score of 300. Goyo will be remembered as a Paratrooper, LA Dodgers and a true Rams fan. He had an amazing 86 years with over 60 years as a husband, dad, grandpa then a great grandpa. He was preceded in death by his father, mother, sisters, Rafaela, Senovia, Virginia, brothers Max and Arthur Rodriguez. He is survived by his wife, Annie, and children: Naomi Rodriguez, Gregg Rodriguez (Bonnie), Rhonda Florick (Greg), Bonnie Cruz (Arthur) and Gary Rodriguez (Darlene). Goyo’s memory also lives on in his fourteen grandchildren: Regina, Christine, Marissa, Arthur, Gary, Valerie, David, Catherine, Gregory, Victor, Aimee, Michael, Andy and Jeffrey; and his great-grandchildren: Madelynn, Malayna, Olivia, Molly and Lucas. He is also survived by his sisters, Rosa Moreno, Estella Gonzales and Mary Barrios.