Written by Night For Vets on January 29, 2021. Posted in Gone But Not Forgotten 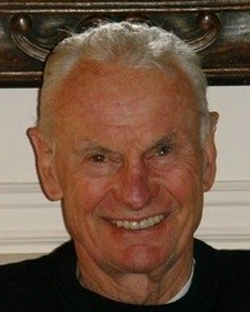 Greg Welton was born in Santa Ana, California in June of 1929 to Harold E. Welton and S. Gladys Welton. He grew up in Fullerton, CA on his family’s farm and orange groves, and he turned into a 6 ft 4 in colossus sporting size 14 cleats when he played offensive and defensive tackle for the University of Redlands Bulldogs in the early 1950s. He volunteered for the U.S. Coast Guard after graduation and served on a destroyer escort in the Pacific. He married the love of his life, Ruth Marlene Coggan, on June 29, 1955, at “The Glass Church” Wayfarers Chapel on the Palos Verdes Peninsula. Greg and Marlene moved to Palos Verdes in the early 1960s where they built the family home and raised their four surviving children, Kathleen A. Welton, G. Christopher Welton (B‚linda Martinez Welton), Jeffrey S. Welton (Susan Heery Welton) and Drew A. Welton (Isabelle Welton). Greg was one of the world’s first computer salespersons. He successfully convinced avant garde business professionals to set aside an entire large room to install a single, bulky Burroughs computer with the power of today’s handheld calculators. He later worked as an executive for Coldwell Banker as a commercial realtor before finishing his career as a stockbroker for Morgan Stanley. Greg and Marlene retired to Solvang, CA in the early 1990s. After Marlene passed away in 1995, Greg traveled the world, splitting his time between Paris, France and Miami, FL before settling down in Palm Desert, CA in 2009. A gifted athlete his entire life, Greg loved tricking his children to follow him down black diamond runs at Mammoth Mountain (they finally got their revenge during the winter of his 65th year: “Follow us, Dad, we know the best way down”). A lifelong runner, he ran and completed the Paris Marathon in 2000 at the age of 70. It was often said that Greg had only two speeds in life: Full Speed Ahead and Stop. And that is how he finished out his days in Palm Desert where he passed away in his sleep on January 24, 2021, at age 91. In addition to his four children, Greg is survived by four granddaughters, three grandsons and one great granddaughter. His brother Donald E. Welton passed away in 2006. Greg leaves numerous friends and extended family members, including Dr. David Welton (Dr. Georgia Edwards) and his sisters and their son Nathan Welton as well as Ronald and Carolyn Beaton and their family. To paraphrase Mark Antony in Shakespeare’s “Julius Caesar”: “Friends, family, countrymen, lend us your ears. We come not to bury Greg Welton, but to praise him…The good that men do lives after them.” May he rest in peace.