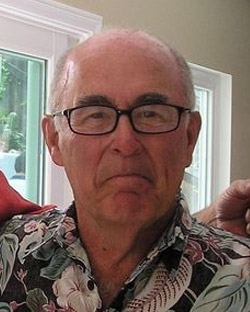 Griffith John Thomas, 90, passed away peacefully Wednesday, November 20, 2019 in Carlsbad, California. He was born October 13, 1929 in Highland, California to Griffith Evan Thomas and Mildred Thomas (Lewis – Holstead). He grew up in the Highland/San Bernardino area. He graduated from San Bernardino High School in 1947.

In October of 1948, he joined the Navy and it wasn’t long until he began to perform duties on the U.S.S. Brush (DD745), a destroyer class vessel during the Korean War. On September 26, 1950, the U.S.S. Brush hit an underwater mine in Tanchon, North Korea, and Griff was badly injured. He received a purple heart for his service.

After being discharged, in 1952, he married his wife, Beth Cox, at the Mission Inn in Riverside, California. Shortly afterward, they started their own family and lived in San Bernardino for a time until moving to Rialto. As the kids grew up, Griff became not only a father to his own children but to all the kids in the neighborhood. He coached Pop Warner football for a number of years and was devoted to his wife and children, attending all their games, school functions, and events. He worked at the 7-up Bottling Company in San Bernardino for 30+ years and retired at the age of 58.

After retirement, Griff and Beth moved to Encinitas, California, where they lived for the last 36 years. He loved traveling and he and Beth completed more than twenty trips on cruise-ships. Griff was preceded in death by his parents, his wife, Beth Thomas (Cox) and his brothers James Thomas, D. Roland Thomas, and Jack Lawson.