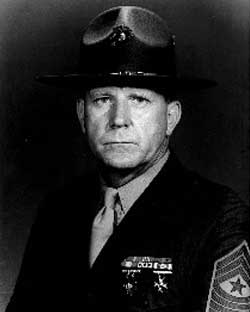 SGT. MAJ. GUENTHER GRIEBAU, USMC (RET) Sgt. Maj. Guenther Griebau, USMC (RET) passed away on August 25, 2021, at the age of 84, at his home in San Bernardino, CA. Born in Hamburg, Germany on June 21, 1937, to Hans B. and Helene Anna Maria Griebau, Guenther was the second of three children. In 1949, Guenther and his father emigrated to the United States where they made their home in Chester, CA. In school, Guenther excelled in sports and in becoming a true American. In 1956, he enlisted into the Marine Corps where he proudly served his country for 26 years. He loved the Corps and everything it stood for. His career took him to many countries throughout the world, including Vietnam, where he was a part of the Saigon Embassy Marine Corps Security detail assigned to protect the ambassador at the American Embassy in Saigon, Vietnam (1969- 70). Guenther retired from the Corps after 26 years, but his service didn’t stop after he took off the uniform. In the ensuing years, he enjoyed working at Budweiser and Toyota of San Bernardino, co-owning Pacific Coast Traffic School, and heading up the Jr. Police Academy at the Lytle Creek Elementary School in San Bernardino. His passion, however, was volunteering. He loved helping people and organizations that he believed in. He worked tirelessly raising money for various veterans’ groups, Santa Claus, Inc., the Riverside National Cemetery Support Committee, the Lighthouse for the Blind, Western Regional Little League, and many, many others. He wanted to make a difference and he did. Guenther was preceded in death by his father, his mother, his sister, Inge, and his beloved pups Duchess, Crystal, and Walker. He is survived by his wife, Martha, sister, Marianne Scherlitzki, daughter, Heidi Fischer and son-in-law, Lee Fischer, daughter Cindy DeMaio, son Mel Chamberlain and his fianc‚, Chris Turner, grandson, Robert DeMaio and wife, Raeline, great-grandchildren, Riley and Reece, and many, many lifelong friends. Services will be held on Friday, September 17 at 10:00 a.m. at Riverside National Cemetery. The service will be live-streamed via the Bobbitt Memorial Chapel Facebook page. In lieu of flowers, the family requests donations be made to the Riverside National Cemetery Support Committee and the Lighthouse for the Blind, San Bernardino, CA. "As long as we remember a person, they’re not really gone. Their thoughts, their feelings, their memories, they become a part of us." James Cronin (The Twelve) Saigon