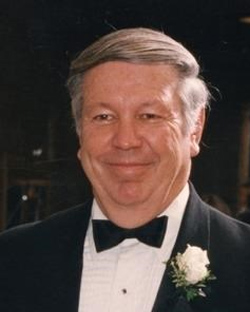 April 1934 – July 2021 Harold Lloyd (Hal) Boring, 87, of Riverside, CA, passed away after a brief illness in late July 2021. He is survived by his wife of 48 years, Gloria (Bowman) Boring; daughter Kristie Boering and stepdaughters Kim Carcamo, Renee Bouche, and Cheri Graser; 9 grandchildren, 18 great-grandchildren, and 2 great-great-grandchildren; sister-in-law of 72 years Anne Boring, and many nieces and nephews, all of whom he enjoyed giving advice to and making laugh. His parents, Everett and Blanche Boring, and siblings Everett Jr, Marvin, and Virginia (Hartwick), predeceased him. Raised in Yucaipa and Redlands, Hal played football for Redlands High School (invoking fans from the opposing team, which included his future wife Gloria at San Bernardino High, to yell "Get Boring" as he ran down the field with the ball), graduating in 1952. He is also an alumnus of the University of Redlands (BA 1956, MA 1962) and of USC (Ed.D 1971). After college and a year of teaching elementary school in Yucaipa, Hal spent two years in the Army, serving as an instructor for the U.S. Armed Forces Institute and then administrative assistant to the Chief Advisor’s Office at the Army Education Center in Nurnberg, Germany. He then returned to the Inland Empire to continue his career as a teacher, principal and administrator, including 21 years as Assistant Superintendent of Administrative Services for the San Bernardino Unified School District until his retirement in 1997. Hal was active in the Association of California School Administrators from his charter membership in 1971 until 2016, as well as in Rotary and the San Bernardino County and State Republican Party. Hal was an avid golfer, poker player, fisherman, dog owner, coupon clipper, and gift giver. His humor, his provider instinct, and his big heart (sometimes hidden within a cool exterior) will be sorely missed.