Written by Night For Vets on May 21, 2018. Posted in Gone But Not Forgotten 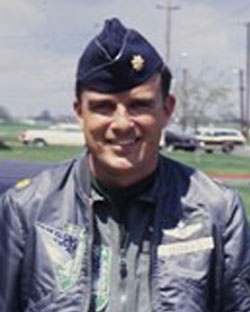 Harold Floyd Dubas passed away on May 10, 2018 at his home in Riverside, California. “Hal” or “Dub”, as he was often called, was born on January 28, 1936 in Burwell, Nebraska to Edward and Helen Dubas and was one of four children. He grew up on his family’s farm in Nebraska and graduated from the University of Nebraska. He was a proud member of Sigma Phi Epsilon Fraternity and was awarded a Bachelor of Science in Agriculture in 1958. Immediately after graduation, he joined the armed forces, serving in the United States Air Force for 26 years and retiring as a Lt. Colonel. He served in the Vietnam War as a navigator on KC 135 air refueling tankers. He met his wife, Mary Ann, while serving at Walker Air Force Base in Roswell, NM flying on B-52 bombers. At the end of his career, he served as the Director of Operations and Training for Strategic Air Command (SAC). Following his retirement from service, he worked in the defense industry using the knowledge from his many years in the military.

Hal was a long-time resident of Riverside, having moved his family here in 1978. He was a fervent sports fan who was passionate about Nebraska and UCLA football, where his son Mark attended, as well as car racing. He loved gardening and proudly reached the designation of Master Gardner.

Harold is survived by his wife of 53 years, Mary Ann Dubas of Riverside; his sons Todd Dubas of Hobbs, New Mexico and Mark Dubas of Santa Monica; his brother Kenneth Dubas and sisters Mary Dubas and Adeline Hamilton.