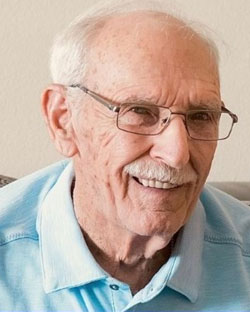 Harold Dean Langley, 89, passed away on April 12, 2022 in Rancho Mirage, CA. Born in 1933 in Locust Grove, OK to William L. and Mary Langley, he was the 6th of 8 children. When he was a teen, the family moved to Siloam Springs, AK. The Langley boys had many adventures while hunting, trapping and fishing in the local woods – years later when gathered together, they’d always have a good chuckle recounting these adventures. Dean showed his athletic prowess as a pitcher, in fact, he decided to live with his oldest sister in Gruver, TX during his senior high school year so he’d have more competition to improve his skills. He graduated in 1951 and headed to Texas A&M to begin his college studies, all the while keeping an eye on a certain Gruver hometown girl. He transferred to the University of Arkansas, Fayetteville, where he would earn a B.S. in Geology and then a M.S. in Science Education.

Dean served in Korea while in the Marine Corps. Upon returning stateside, that certain Gruver hometown girl he’d been writing to said, “Yes!” Virginia “Ginger” Cator and Dean were married at her family’s home north of Gruver on September 5, 1955. They lived at Camp Pendleton until Dean was discharged about a year later. Together, they had 2 children: Pamela and Samuel.

Dean began his teaching career in a small school in Las Animas, CO. He would go on to teach in Gruver and Texline, TX; Gilbert, AZ; and finally, in Palm Springs, CA. Starting at Nellie Coffman, Jr. High in 1964 and transferring to Palm Springs High School in 1980, Mr. Langley continued teaching physics and physical science in the Science Department until he retired in 1989. “Mr. Science” served as a mentor for other educators implementing science instruction with the use of kits as well as hands-on student enrichment activities in the elementary schools.

Dean was an accomplished tennis player and formed life-long friendships on courts in Palm Springs – especially Ruth Hardy Park, and when vacationing near Los Osos and Atascadero. He and Ginger were a dynamic duo in doubles. He loved to fish whether it be a stream, lake or ocean. While on lakes, he could fit in some time for water skiing, too. Camping and exploring nature throughout the Pacific Northwest made for summertime fun. Family trips covered almost every state and National Park. As empty-nesters, Ginger and Dean visited Alaska, Hawaii, Costa Rica, Europe and the Caribbean. They cherished the cool weather and beautiful scenery around San Luis Obispo for many, many summer getaways. No matter where they traveled, the trips to Texas and Oklahoma to visit family were the most important.

When Dean and Ginger weren’t gardening, they’d be planning their next bridge party with friends. But their biggest joy was the time spent with their “chickadees” grandchildren.

He was proud to be a tribal member of the Cherokee Nation. Long before the convenience of Ancestry.com, Dean further researched his family roots. He found ancestors who fought in the Civil War, the War of 1812 and even the Revolutionary War. In addition to this family history, he enjoyed sharing photographs of his grandparents being early settlers in north-eastern Oklahoma.

Dean had a mission to help others. He was a gentleman and instilled honesty, integrity, hard work, and the value of an education in his family. Even after battling the slow decline of dementia, he never lost that twinkle in his eye, really firm handshake, concern for others and commitment to his family. “Da” had the fortune to know 6 great-grandchildren. A loving husband, father, grandfather, son, brother and uncle, he will be greatly missed.

The family would like to thank the staff at Atria Rancho Mirage Terrace and Vintage Care Agency for their help and kindness. Mia Hernandez was an invaluable constant companion providing loving care and friendship for the past 4 years.