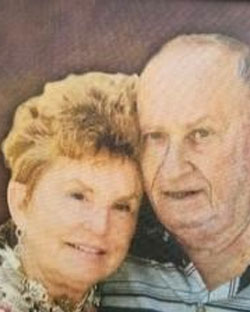 Harold Ray Simmons, age 92, of Riverside, CA, was laid to rest July 30, 2020, He joins the love of his life, LaVerne Simmons, who passed in January 2017. They had a joyfull marriage of 63 years. He passed peacefully July 16, 2020 in his home with his family by his side. Harold was also preceded in passing by their son, Randal Lee Simmons, and Harold’s brother Homer Simmons, who drove a landing craft on the beach at Normandy, and Homer’s wife, Goldie, who taught Harold’s daughter, Helen Elaine, old fashioned skills like sewing and quilting. Harold was also preceded by his son-in-law, the father of his grandchildren, Robert Liggett, who passed at the young age of 32. He is survived by his daughter Helen Elaine Liggett, and his grandchildren, Derek Allen Liggett and his great granddaughter Tayler, and granddaughter Carey Elaine Binikos and his great granddaughter Presley Elaine Binikos and by Helen’s husband Andrew Silva. When his daughter Helen Elaine was widowed at a young age with two young children, Derek and Carey, Harold embraced the role of surrogate father. At every basketball game or dance recital or gymnastics event, he was there in the stands with his video camera cheering them on. The Sunday family dinners, sometimes raucous, are still missed as family has passed or moved on. It was always like Thanksgiving on those Sundays in Harold and LaVerne’s home. . Harold was born September 8, 1927 in Blackwell, Oklahoma. After he graduated from Corona High School in 1945, he enlisted in the U.S. Army. After his service, he went to work as a production manager for a major paint company, retiring as a vice president. Harold and LaVerne were fortunate to purchase a cabin at the base of Mt. Whitney, the highest mountain in Lower 48, in the Eastern Sierra Nevada, and it has been the spiritual center of the family for four generations. Helen and Andrew were married on the gorgeous stone patio there. Our family would not have the great life we have now without Harold’s and LaVerne’s love and support. They were the best parents and grandparents and great grandparents ever. They will always be missed. We Love you PaPa.