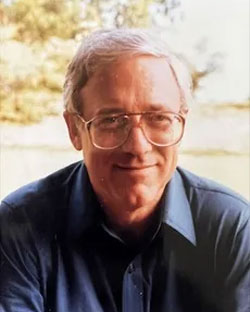 Bert Upson passed away on November 2nd at his home in Palm Desert, CA with his wife and family by his side. He is survived by his wife Joan, son John, daughter Holly, stepson Scott, 3 grandchildren, Jessica, Marshall, and Abigail and 4 great grandchildren. Bert was born in Cincinnati, Ohio on November 23rd, 1932, to Mark and Anne Upson, the last of 4 children. He attended the Hill School in Pottstown, PA, before heading to Yale University in 1951, where he was a member of the famous acapella singing group, the Yale Whiffenpoofs. Following college in 1956, he fulfilled his Yale ROTC requirements by serving in the U.S. Army as a lieutenant stationed at Ft. Ord, Monterey, CA. Bert’s advertising career began on Madison Avenue in the fall of 1958 and lasted 15 years during the golden days of advertising as he described them. Then, in 1974, he joined The American Paper Institute increasing the markets for recycled paper packaging. In the late 1980s, Bert started his own business in the field of personal and professional development and leadership skills training in Newport, R.I. where he and his wife Joan were residing. Bert and Joan moved to Palm Desert, CA in 1999 where he became active in the Citizens on Patrol, Big Brothers organization, Shadow Mountain Resort and the Military Officers Association of America. Then his business took him to New York on September 11, 2001, where he endured a harrowing escape from the 78th floor of the South Tower which he later wrote about in his book, “On A Clear Day 9/11”. Bert and Joan shared a loving and adventurous 42 years together filled with travels all over the world and close friendships which included many dinner parties filled with love and laughter. He will be sorely missed by all his family and friends.