Written by Night For Vets on March 6, 2019. Posted in Gone But Not Forgotten 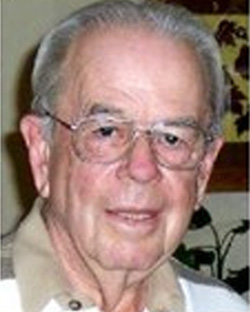 On Tuesday, February 19, 2019 Hunter Johnson Jr, loving husband, father, and grandfather, passed away. Hunter was born October 17, 1924 in Fort Worth, TX. His family moved to Salinas, CA when he was a child, where his father started a lettuce packing business.

Hunter enlisted in the U.S. Air Force, became a pilot, and was stationed in Germany. There, he met the love of his life, a Norwegian girl that worked with the Red Cross by the name of Bjorg Stromnis. Hunter and Bjorg were married on July 6, 1946 in Kitzingen, Germany. They moved back to the States and lived in Salinas, CA, where Hunter was a Ranch Superintendent until 1956. He and Bjorg then moved to Buena Park, CA, then to University of California Davis, next to University of Southern California, and finally landing in University of California at Riverside, all in pursuit of a Master’s Degree in Agriculture, working with plants and vegetables in the research department. This work took Hunter to local growers in the Southern California area to work with better watering methods and how to deal with pests and changing weather conditions.

Retiring in 1987 and moving to Sun Lakes Country Club as one of its founders, Hunter was very involved with golf and even helped out a little with management of the course. He was also involved with the community gardens in the area. Hunter always had a true love for growing things. His last five years was spent in Mesa, AZ with family.