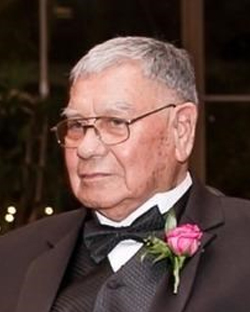 Ildefonzo Ray Zaragoza (IRay) Ildefonzo Ray Zaragoza (IRay), 95, of Colton, CA, passed away on January 7, 2022. He was born in San Bernardino on January 23, 1926 to Lucio and Trinidad Zaragoza. He attended Colton High School before enlisting in the United States Army at the age of 17 and served in WWII in Germany. He achieved the rank of staff sergeant prior to losing his leg in combat and was the recipient of the Purple Heart medal. Furthermore, during his time of service he received a bronze two star medal, WWII victory medal, good conduct medal and American Theatre ribbon. After his time of service, he was employed for 25 years as an Auto Service Manager. He is survived by four children; Raymond Zaragoza, Richard Zaragoza, Yolanda Gonzalez (Joe) and Elizabeth Hernandez (Henry). He further had 9 grandchildren and 9 great grandchildren. Lastly, his brother Jess Zaragoza and sisters, Carmen Noffsinger and Mary Isakson. Preceded in death by his parents, Lucio and Trinidad, his brothers, Lupe and Ned, four sisters, Isidra, Paula, Nancy, Hope and daughter-in-law, Marilyn.