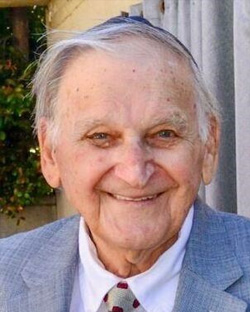 Irving Sachs was born on the west side of Chicago on Sept. 12, 1922, the fifth and youngest child of Ida and Philip Sachs. The Great Depression hit his family hard and he retold the childhood story of often being hungry during those times. As a young man he began college but was later drafted into the army. There he was instructed in the intelligence skills that got him to the French countryside protecting one of the communication relay stations along with a small company of soldiers. He remembered how generous the local French farmers were in providing food to him and his fellow soldiers.

After the war, Irving benefitted from the GI Bill and was able to graduate with a law degree from DePaul University. Shortly thereafter, he married Betty (nee Taub) and in the following years adopted four children. During this time he practiced law while working to attain his CPA degree. Sadly, Betty passed away leaving Irving a widower with 4 young children. A year later he met Francine (nee Rodbard) and in 1965 married her adopting her 3 children. In 1969 his last child came along and he purchased a nine-passenger station wagon. At that point he was a father supporting 8 children all of whom can attest to having no memory of hearing him utter an unkind word.

Over the years Irving enjoyed a successful law career with a reputation for great integrity and kindness. He and Francine first wintered in Palm Springs in 1972, the first of regular visits over many years. In 1994 they purchased a home in Indian Ridge in Palm Desert and became active and well-loved club members. Irving was an avid golfer and later was instrumental in starting the Bridge club. Later he was a leader in Passover services for as many as 250 members at IRCC. Countless times his children and grandchildren saw the kindness and respect with which he treated people from all walks of life. As many times, he was greeted by friends and colleagues with great warmth – everyone stopped by his table to say hello.

Unfortunately, after 43 years of marriage he lost his wife Francine to cancer in 2008. About a year later he met IRCC resident Marion Hochstadter who has been his companion and significant other for the last 10 years. They enjoyed a number of happy cruises together.

Some of the many things people have said over the years about Irving: that he lit up every room he entered; that they never saw him in a bad mood; that he passed on his joy and happiness in every conversation he had; that he has been an example, especially to his family, of hard work, honor and integrity; that he always made time to listen to problems and give excellent advice; that he was the one person in the room everyone wanted to speak with. He was about as universally loved as a person could be.