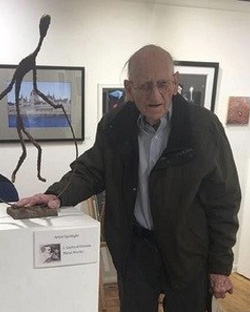 J. Gaylord Ortman, 89, passed away peacefully with family by his side on February 20, 2021. Gaylord was born December 4, 1931 in Hennessey, Oklahoma where his youth was surrounded by the family-owned Ortman Theater. Gaylord’s creative curiosity and entrepreneurial spirt took him to the west coast where he earned his B.A. in Industrial Design from UCLA. He was later drafted and served in the U.S. Navy. After experimenting in a variety of art modalities, it was metal sculpture that would take his heart–much like a beautiful young lady he met at a church youth group in Orange County California. Gaylord Ortman and Nannette Grace Vanderford were married in 1959. Gaylord continued to perfect his craft in metal sculpture and supported his family by designing and creating custom pieces for the artwork supplier Peter Pepper. His art was displayed in brochures and distributed to designers and companies all over the United States. (One of his wall hangings was used in Kevin’s living room in the Wonder Years!) Gaylord moved his growing family to Woodcrest, California where he had the room to create. This period was filled with packing up the family and traveling around California displaying his work at mall art shows. In the 1970’s Gaylord became enthralled with the new age of recycling and started designing artwork made from tin cans. “Whims in Tin” became an instant hit! To keep up with demand and spread his forward-thinking vision to more people, he opened galleries (Dimension West) in Claremont, California and Laguna Beach. Gaylord was living his passion while supporting his family. Then the recession hit. After closing both galleries he worked a few years in the corporate world but quickly realized he would never be happy in that environment so he started a sign business. He could exercise his creative muscle while providing a necessary product for consumers. Gaylord thrived once again until he finally retired from his sign-making business in 1990’s. Retirement saw he and Nan traveling around the U.S., tinkering in his studio and making bi-yearly trips to Hennessey to tend to his childhood home. After Nan’s passing in 2008, Gaylord continued to live on his own until he became a resident of Raincross at Riverside in the memory care center in 2017. In 2019, his daughter Carolyn coordinated an art show to display his art at a local gallery in Downtown Riverside. He once again had the opportunity to share his creative genius with friends, family, and the public. Raincross was his home until he passed from complications due to Covid. He was “Feisty” until the end, his caregivers stated. Despite a lifetime of resiliency at every turn, he finally met his match. Gaylord is survived by his daughters Julie Ortman (Pamela Ruder) and Carolyn Ortman (Rich Caccese). The family wishes to extend a sincere appreciation for Dad’s care provided by the dedicated staff at Raincross, and an extra Thank You to special caregivers Jessie Elliott and Debbie James who always brought Gaylord smiles and laughter and he to them. Gaylord Ortman was an innovator. A creative visionary. Ahead of his time. These qualities allowed him to always provide for his family and be a loving husband and an amazing Dad to his girls. His stories and creative mind (that never turned off) will be missed! “If you love what you do, don’t let setbacks detour your passion. Pursue your dreams because you will be the one that make our lives more rewarding. The important people will always be there to cheer you on!” – Gaylord Ortman