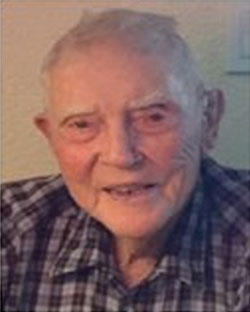 J.W. BOYDE Age 94, of Corona, CA, died 9/2/2018 in Riverside, CA. He was born 7/18/1924 in Crockett, TX, son of John Finley Boyde and Myrtle Susan Crockett-Boyde. Growing up on a farm in Payne Springs, TX; he was nicknamed “Dude” by his brothers and sisters. His nieces and nephews still call him that today. He enjoyed playing the harmonica and fiddle.

J.W. was a farmer for some time and then he joined the U.S .Army in 1944. He was with the 104th Infantry Div. with the Timberwolves. J.W. was a SSGT and earned the Purple Heart, WWII Victory Medal, American Campaign Medal, European African Middle Eastern Campaign Medal, Good Conduct Medal and Infantryman Combat Badge. He was wounded near the Roer River in Germany and was honorably discharged in 1946.

J.W. lived in Norwalk for over 40 years until moving to Corona, where he has resided for the last 30 years. J.W. worked as a Forklift Mechanic and retired from Pioneer Flintkote after 45 years. Surviving are daughter and son-in-law, Gayle (Terry) Castongia of Huntersville, NC.; granddaughter and her husband, Michelle (Donovan) Ozenne; grandson and his wife, Steven (Amy) Castongia; 2 grandchildren, Michelle Ozenne, Steven Castongia and 2 great-grandchildren, Austin and Autumn Ozenne. J.W. was preceded in death by his parents; his 4 siblings, Johnny Lee Boyde, Vernon Boyde, Ruby Gandy, Elvie Sanderford and his beloved wife, Eva D. Boyde.