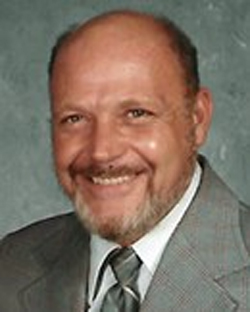 J. Gene Zevenbergen Gene, 87, of Yucaipa, passed away on Saturday, November 3, 2018. He was born on July 31, 1931 in Wilson Township, Iowa, to Garret and Elizabeth (Runia) Zevenbergen. He was the eldest of nine children raised on the family farm near Sibley, Iowa. He loved working with his hands and became skilled at electrical and mechanical work, as well as plumbing, carpentry, and masonry. He especially liked repairing autos and tractors. In 1951, he joined the United States Air Force as an aircraft mechanic. During the Korean Conflict, he was stationed overseas first at Kunsan Air Force Base with the 5th Air Force, 8th Fighter-Bomber Group, as crew chief on F-84 Thunderjets. He then went to Kimpo Air Force Base with the 4th Fighter-Interceptor Group as crew chief on F-86E Sabre jets.

Upon returning to the States, he married his hometown sweetheart, Avonne Prince, and had two children. In 1958, he moved his young family to California, settling in Redlands where he found a large Dutch community similar to the one left behind in Iowa. He became a member of the Christian Reformed Church and made friendships that lasted his entire lifetime. Gene was employed as head mechanic at Moore’s Auto Service for eleven years. In 1967, he moved his family to Yucaipa, and in 1969, opened his own business in Redlands, Gene’s Auto Repair. He retired in the mid 1990’s, bought a travel trailer and toured the country with his wife Avonne. He stayed active as a handyman, hiring out for odd jobs of all types.

As a member of the River Christian Reformed Church, he volunteered with building and grounds maintenance for more than 15 years. He was active with Mexican Christian Children’s Aid (MCCA) making many trips to Mexico with food and supplies for orphanages. Gene loved every kind of auto racing, from dirt track sprint cars to super stocks to NHRA dragsters. He enjoyed camping with the Flying Dutchmen, meeting friends for coffee and doughnuts, and spending time with his grandchildren and great-grandchildren. A man of few words, but much action, he was a good and faithful servant to his Lord and fellow man.