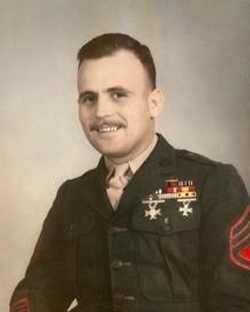 Jack Cullari, age 93, died January 25, 2022 peacefully in his home. Jack was born and raised in Trenton, New Jersey. At the age of 16 he joined the U.S. Coast Guard which he served in for 2 years. In 1947 at 18 years old he enlisted in the United States Marine Corps. After boot camp he was sent to Korea, where he made the Inchon Landing. He dedicated 20 years to the U.S.M.C. In 1966 he retired from Camp Pendleton as a Staff Sergeant. He was married to his wife Virginia for 68 years and resided in Hemet, CA for 54 years. He worked for Rohr Ind. in Riverside for 30 years where he retired from. He was the Post Commander of VFW 2266 and District Commander from 1995-1997. He is survived by his son Jack Cullari Jr. and wife Melinda; his daughter Teresa Murray and husband Michael Murray, 7 grandchildren and 7 great grandchildren.