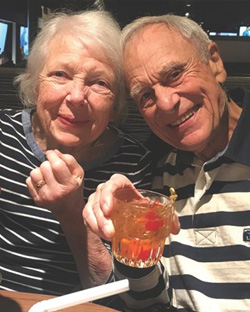 It is with great sadness that the family of James and Lenora Ross announce their passing. Lenora Luise Ross passed away on June 9, 2020 after a long battle with cancer. Grief-stricken, James passed away two weeks later on June 23, 2020. Lenora was born on August 13, 1933 in Detroit, MI to Vera Alice Cekau and Frederick William Lindhorst. James was born on April 11, 1933 in Lansing, MI to Irene Dorothy Gollach and Emile Herbert Ross. James and Lenora met in 1953 at the University of Michigan as underclassmen. James was studying pre-med and Lenora was pursuing a degree in elementary education. James always said that she was the prettiest girl he had ever seen. The couple graduated from U of M in 1955 and were married in August 1956 in Detroit. While James attended medical school at U of M, Lenora began her first teaching assignment at the Ford Factory School in Dearborn, MI. His pursuit of a urological internship took them to Oakland, CA in 1958 where Lenora taught at Mt. Eden. In 1960 they moved to Burlington, VT for James’s urological residency and it was there that they welcomed their two sons. Eglin AFB became their next home after James was commissioned as a Captain in the Air Force, serving as a base urologist. In 1965 the family moved to Redlands where James began his urology practice. That year, their daughter was born. James was a surgeon on staff at Redlands Community Hospital and had operating privileges at surrounding area hospitals including Loma Linda, Lake Arrowhead, Banning and Pomona. Lenora was active in the PTA, where she served as PTA President at Mariposa Elementary School. Lenora hosted many Camellia Luncheons for the benefit of the Assistance League of Redlands at their Redlands home. The couple were members of the First Lutheran Church in Redlands, joining the congregation in 1965. James and Lenora traveled the world together, upon returning home, their stories were always a source of great intrigue for the listener. James and Lenora are survived by their three children, Charles (Julie), James (Sue Trafton) and Ashley (Brett Hyder), three grandchildren, Jamie, Dalton and Emmeline, James’s sister Sandra Watkinson, sister in-law Carolyn Lindhorst, two nieces, and four nephews, and countless friends.