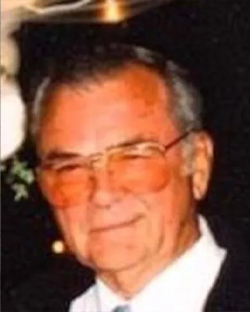 James “Jim” Bigley, 91, passed away peacefully in his sleep on March 23, 2022. Jim was born on April 1, 1930 in San Bernardino, CA, before there was a hospital in Palm Springs, CA, where he was raised until entering the Elsinore Naval and Military School in 1945.

After graduating University of California at Berkeley in 1953 he reported to Naval Aviation Flight School in Pensacola, FL and became a U.S. Marine Corps pilot. Jim fondly recalled his time serving in the Fleet while stationed in Edenton, NC, becoming a Captain and flight instructor in Pensacola, and meeting Gloria Avon Patrick in Creswell, NC, who he married in 1956 before returning to Palm Springs in 1957.

Jim was then recruited by Union Oil Company to train new dealers in Phoenix, AZ, where he started a family with Gloria. It wasn’t long before he was asked to return to Palm Springs for good to run the family service station. He retired after 30 successful years to care for Gloria. Jim was widowed after 37 loving years, and then found more joy with his beloved companion, Barbara Hess until her passing in 2020. Jim and Barbara met many great people volunteering at the Palm Springs Air Museum.

He enjoyed boating, family road trips, visits to Morro Bay, and many years of recreational shooting with friends and family at the Banning Sportsman Club. Jim was kind, generous, and a man of great integrity and honesty. He taught us how to serve, be dependable and respect others. Jim will be remembered for the comfort he brought us and he will be missed by all that knew him.

Jim is survived by his children Donna, Steve, and Brad Bigley, daughter-in-law Nancy Bigley, and Barbara’s children and close relatives Marshall and Sue Palmer, Randy and Sheri Palmer, and Lynn and Jamie Medvedeff and their families.