Written by Night For Vets on March 18, 2019. Posted in Gone But Not Forgotten 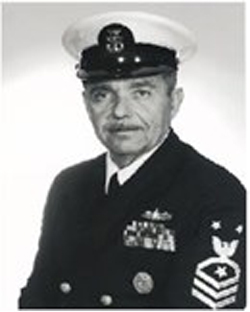 James Joseph Bunkers, age 80, of Hemet, California, passed away Tuesday, March 5, 2019, at his residence. James was born on October 7, 1938 in Le Mars, Iowa. He was the son of the late Clarence John Bunkers and the late Charlotte Elizabeth (Gingerich) Bunkers. James proudly served our country in the U.S. Navy from 1955 to 1992, retiring in 1993 as a Command Master Chief. He served on the USS New Jersey. The two highlights of his Naval career was being selected for the Sergeant Majors Academy and serving as the CMC of the USS New Jersey. James was most proud of his three daughters serving in the military.

After he retired, James went on to become a teacher for the Jr. ROTC classes in the Fontana Unified School District. In his spare time, James enjoyed golfing and bowling. James was a highly motivated individual and will be remembered for his loyalty and dedication to his career. James was preceded in death by his wife, Virginia Bunkers, daughter, Lucy Bunkers, sisters, Mary Lou McMurtry, Sally Strauss, Nancy Morey, and brothers, Robert Bunkers and Conrad Bunkers. James is survived by daughters, Mary (John) Celli, and Elizabeth (Jimmy) Guerra, grandchildren, Elizabeth Celli, James Celli, and David Celli, and his dog, Chief.