Written by Night For Vets on July 2, 2020. Posted in Gone But Not Forgotten 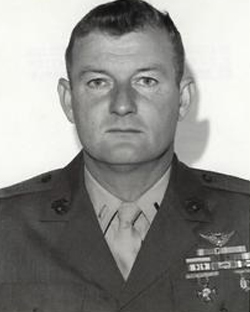 James Trafford Connacher, a long time resident of Corona, CA, passed away at Kindred Hospital, Rancho Cucamonga, CA after a lengthy illness. James was born in Indiana, PA to Lisle and Mary Connacher, and grew up in Clymer, PA. He was their only son; he had three sisters. During his senior high school year, James met the love of his life, Sondra Sunday, while she was working as a cashier at a grocery store. James often joked that Sondra’s father begged him to marry her, or she would “throw herself from the town bridge in grief”. They were married shortly after he joined the Marines. James joined the United States Marine Corps shortly after graduating high school in what would become his first career. James was a patriot who spent 20 years in the Marines. He found himself in aviation as a helicopter mechanic, which led him to being a crew chief on various helicopters. He served four tours in Vietnam, being shot down on one occasion. But luckily after evading the enemy for one night, he was rescued the following day. During the course of his service he traveled the world, and was stationed in many countries, and for a while was assigned to the USS Boxer as a Fleet Marine with his aviation unit. While in the Marines James was recognized for his exceptional service and devotion to duty, and was selected as one of the first recipients of the Marine Corps Air Crewman Award (now an annual award recognizing exceptional Marine Corps Air Crewmen). James participated in numerous rescue operations (both military and civilian), and he received several life-saving awards, which were personally presented to him by Igor Sikorsky (the developer of the Sikorsky Helicopter). One of James’ proudest moments was when General Krulak pinned his Combat Air Crew “Wings” on him after the siege at Khe Sanh. James’ last duty station was Marine Corps Air Station Tustin (known as LTA for the Lighter Than Air ships that were once stationed there). While flying over Southern California, he noticed the then small town of Corona, CA, and thought it would be a nice place for his family to settle down at the end of his final enlistment. He retired in 1978 as a Second Lieutenant having risen through the ranks from Private. After retiring from the Marines, James began his second career working for Alcoa Aluminum at the Corona Foundry. He started on the Foundry floor, and ultimately worked his way up to the position of Foundry supervisor, where he was responsible for supervising the molding casts for various military projects including the cruise missile. After retiring from Alcoa, James, who was a licensed pilot, returned to his love of aviation keeping his hand in by working as an air frame and power mechanic for several local flight schools. He often said he did this so he could continue to fly on the cheap. James was a long time member of the American Legion Post #0742, Corona CA. His hobbies included shooting and reloading his own ammunition (he was a lifetime member of the NRA), wood working and wood carving (he was a member of the Norco Chip Chuckers), fishing, and traveling with Sondra in their travel trailer. James had an appetite for knowledge, and loved to learn “what made things tick”. For example, when he got into the sport of shooting, he wanted to know how firearms worked, so he took a gunsmith course, which led to his building several of his own firearms. He took up SCUBA diving. Not content to just learn to dive, he fashioned his own air tanks, built his own air regulator, melted and molded his own lead weight belt, and constructed his own wetsuit. James is survived by his wife of 59 years, Sondra; his son Timothy (Pam); his daughter Tammi Meeks (Bruce); grandchildren Nikole Sanchez (Daniel), Rebecca Meeks (Jake), Christina Sesepasara (Lepe), Patrick Meeks all of Riverside, CA, and Stephanie Rust (Joseph) of Omaha, NE; and eight great grandchildren. Of all the titles James held, the ones that meant most to him were “Papa” to his grandchildren and “G-Paw” to his great grandchildren. James was loved by his family, and will be truly missed.