Written by Night For Vets on August 27, 2021. Posted in Gone But Not Forgotten 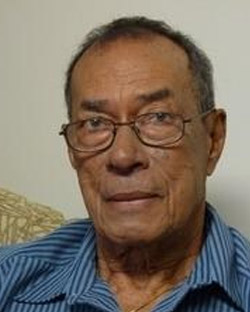 July 6, 1927 – August 9, 2021 Jim passed away peacefully at home with his family by his side at the age of 94. Known as "Gene" on the East Coast, he was born in Boston, Ma, graduating from Boston University with a master in physics, after serving in the army in World War II. In 1958 he relocated his young family to California, eventually settling in Riverside. He spent most of his professional life as a physicist with the Aerospace Corporation in El Segundo. Jim will be remembered for his keen interest in people and curiosity about life. He was an avid lifelong tennis player and member of the Riverside genealogy society. He enjoyed playing the guitar, history, travel, learning languages, researching his family roots and adored his family. He is survived by his loving wife of 69 years Marjorie, daughters Gina Curtis and Robin Curtis-Greer, son Peter and wife Jennifer, son Scott and wife Sherrie, in addition to nine cherished grandchildren. He will be missed immensely.