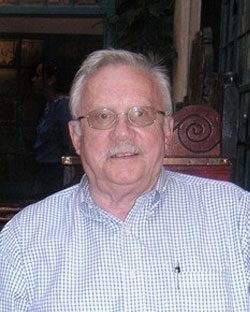 Long time Claremont, CA resident James Joseph Dorst (Jim) passed away on December 22, 2020 at the age of 88. (Did not have COVID.) Jim was born on March 15, 1932 in Neillsville, Wisconsin, to Raymond John Dorst and Elva (Garbush) Dorst. The depression was just getting started. His family lived on a dairy farm that his dad was sharecropping with the owners. Jim was six years old and in the second grade when his dad bought his first farm. When he was nine years old, Jim could drive a tractor and a team of horses. Jim’s mom, dad and sister Patricia would work 12-14 hour days to make the farm successful. In 1948, his parents sold the farm and they moved to Colby, Wisconsin. He then worked as a cheese maker for two years and then in a gravel pit for a year. Jim joined the Marine Corps in October 1952 and served for three years. He went to Korea and was assigned to work EOD and ammo maintenance for 12 months. He returned to the states on August 18, 1954. He then received orders to report to Quantico, Virginia, where he was stationed at Camp Barrett at the ammo dump. Jim issued ammo to the FBI, CIA and officers in basic training. When he came home from the service, he worked as an auto mechanic for his father and a tree trimmer for ACME Tree Service. In 1956, Jim met Beverly Brodhagen and they were married on September 7, 1957. They moved to Claremont, California in 1960 where Jim started his career in construction. He worked as a glazing estimator for Olson Glass and Granite Glass before starting his own glazing company (D and D Company) in 1984 with his partner Gary Dryden. In 2000, he started his own glazing company called Padua Glass. Jim was well respected through the glazing industry, serving as Chairman of the Board for the California Glass Association in 2002 and served on their board of directors, and he was President of the Southern California Glass Management Association from 1985-1986. He received a certificate of appreciation from the Local 636 and the California Apprenticeship Council. Mr. Dorst was also part of the Industry Expert Program for the California State License Board. Jim and Beverly enjoyed spending many vacations in the southwest making sure they traveled to the Indian Market in Santa Fe, New Mexico, every August. Jim is survived by his wife Beverly Dorst, daughters Debra Dorst Porada, Vanessa Huber and son James Dorst, grandsons Alexander Porada (Kristine), Michael Huber (Jourdan) and Jacob Huber (Analyssa), great-grandson Jackson Huber and great-granddaughter Asha Porada. Jim’s sister Patricia (Dorst) Mayeda and brother Raymond John Dorst preceded him in death.