Written by Night For Vets on June 1, 2021. Posted in Gone But Not Forgotten 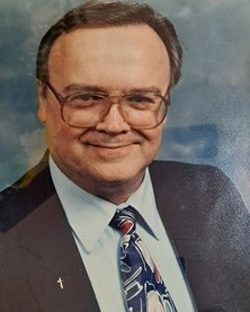 Age 76, entered eternity on April 24, 2021 after a long, difficult, yet courageous fight from cancer. Jim was born to William and Dorothy Downs in Lincoln, NE on July 20, 1944. Jim’s parents and two sisters moved to Huntington Park, CA in 1959, where Jim graduated from Huntington Park High School in 1962. He immediately enlisted in the Army and served one tour in South Korea. He was honorably discharged in 1964. Jim met his wife, Connie in 1972 and married in August 1973. Together they raised their six children, Tracy Easley, Michael King, Robert Downs, Diana Shepherd, Sarah Downs, and James Downs, Jr. in Ontario, CA. Jim fully believed in a life of service and that was demonstrated as he served as the school board trustee of Ontario-Montclair School District from 1989-2005. He also served as the “Voice of the Tiger Pride”, Chaffey High School’s marching band for 30 years, from 1987-2017. He served on multiple commissions, including the Planning Commission of Ontario for about 20 years. Jim loved the Lord Jesus Christ and believed that to honor Him was to serve him. As God’s servant, he worked as the head usher of the Glories of Christmas and Easter for 20 years at the Crystal Cathedral, and also served as the head usher for the church services for many years. As part of his work for Jesus, he also became a member of the discipleship organization Southern California Walk to Emmaus and served a number of times as the head cook of many of the “walks” as well as served as Lay Director of the community for 3 years. Jim had a wonderful sense of humor, loved music and he loved to read. These were some of his passions. But his main passion was his family. He is survived by his wife, Connie, his two sisters, Kathi Gorgas and Vicki Bird, his 6 children, 17 grandchildren, and 7 great grandchildren.