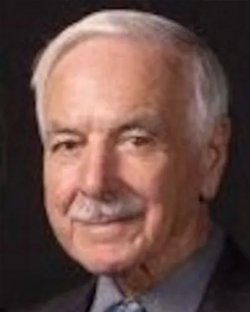 James Russell Lizzio of Rancho Mirage, CA, formerly of Niagara Falls, NY, entered eternal rest on June 3, 2022, at the age of 85, Jim was preceded in death by his parents Carmella and John Lizzio Jim is survived by his wife of 39 years, Ann (Wilson) Lizzio, also survived by daughter Theresa (Jim) Willis; son John Jay; (Beth) Lizzio; grandchildren Laura Christine Willis; Vincent James Lizzio; brother, John Lizzio; Loryce Detra; and sister-in-law Joan Lizzio (late Joseph); in addition to many nieces, nephews, and cousins. Jim was preceded in death by his brothers Alfred (late Ida) and Joseph Lizzio; sister Betty Fonte (late Raymond) and the mother of his children, Patsy Lizzio. Jim was born in Portage, PA in 1936 and moved to Niagara Falls with his family at the age of 10. Jim graduated from Niagara Falls High School in 1963 and joined the US Army 101st Airborne Division. Following his discharge, he relocated to Van Nuys, CA, and worked as an engineer at Ampex, in the computer industry. In 1972 Jim relocated to Orange County, CA where he founded his first company, Concept Development, Inc. (1972-2018) an engineering firm. Jim started a second company, Storage Concepts, Inc. (1984-2003). Jim earned his MBA from Pepperdine University in Malibu, CA in 1986. Having served in the Airborne Division awakened a love for the sky. Jim enjoyed sky diving and joined a team at Taft Airport. He also took photos of fellow teammates while they performed a multi-person star formation while descending to the drop zone. Several of his photographs were published in skydiving magazines. While Jim was learning to fly, he purchased a Cessna 140. Excited to fly his new airplane, he piloted it to Niagara Falls to visit his family. While visiting, he mentioned to his mom he was going to stop and visit his sister Betty in Ohio on his return trip to CA. Mom, unaware Jim had flown without obtaining his pilot’s license, asked to accompany him. Although this made Jim extremely nervous, he didn’t want to disappoint her and flew her to Ohio. Jim owned several airplanes over the years, his favorite was an Aerostar 601P that he used for work and vacation trips. Jim joined the Orange County Sheriff’s Department Aero Squadron as a volunteer and transported prisoners for the county for several years. Jim became a proficient pilot making several cross-country trips to visit family on the East coast. His most remarkable flight was a two-week trip from Orange County, CA to Milan, Italy in 1989. Jim retained his love of flying and at the age of 70 purchased his second Aerostar 601P and enjoyed another six years of being a private pilot. Jim retired in 2004 and moved to La Quinta, CA where he took up golf, won several tournaments, and landed four holes-in-one. His love for flying and travel never waned. He visited all fifty states and over thirty countries. Jim lived a truly fun and exciting life, he enjoyed socializing with family and friends. He was a gentleman – always happy, kind, caring and lived life to the fullest. Jim will be deeply missed.