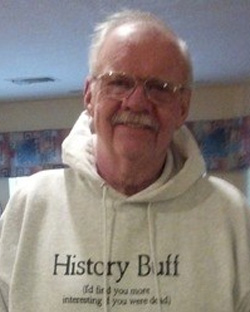 Jim was born in Boston, Massachusetts to parents John Lavis and Julia L. Mahoney. Jim attended elementary and high school in Boston. He entered the Jesuit Seminary but after a couple of years realized this was not the path he wanted to follow. Jim graduated from Boston College 1992 with a degree in economics. Later on he earned a Master’s degree in International Relations from University of Southern California, 1973, a Master’s in Public Administration from California State University, Northridge, 1992 He continued to pursue his education culminating in a PhD in Organization and Management from Capella University, 2010. Jim joined the Air Force in 1962, traveled the world, served several tours of duty in Vietnam. Norton Air Force Base was his last base assignment before retiring as a captain 1983. Jim married Ann White in 1965. They had three children, 2 sons John and Peter Mahoney and daughter Erin Mahoney. Jim was a master of trivia and an avid reader. He was an adjunct professor for Chapman University as well as Riverside University for many years. In 1989 he married Barbara James in Sydney, Australia. The had been married 31 years at the time of his death. Jim started his own company, The Paragon Group in 1996. He prepared businesses for ISO-9000 certification audits for ANSI-ASQ National Accreditation Board. He still had clients at the time of his death. He was predeceased by his parents John and Julia as well as his son Peter. He is survived by his wife Barbara Mahoney, son John Mahoney (Sharon), daughter-in-law Anna Mahoney, daughter Erin Harris. Stepchildren, Wendy Miller, Jeremy Johnson Maribeth) and Dana James. Also grandchildren, Aaron Franklin, Johnathan Mahoney, Valerie and Colin Mahoney, West and Avery Harris, Robert (Sarah) Miller, Jordan Miller, Jeremy (JJ) Johnson, great grandchildren, Trayvon, Savannah, Viviana and Xavien. Jim developed throat cancer in 2011 and was treated with chemo and radiation therapies. He had been cancer free since 2013. On February 1st he tested positive for Covid-19. It seemed he was going to have a mild case but on his tenth day be became very sick and died at home in his favorite recliner, the TV remote on his lap and the news on. He was much loved.