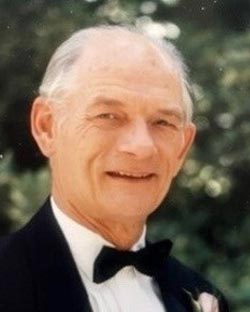 James Neal McCallum (Jim) was born December 17, 1939 in Montgomery, AL to Marle P. McCallum and Alta Ovada MCallum and passed August 4, 2022 in Citrus Heights, CA. He was preceded in death by his parents, his wife of 52 years, Myrtle Cone McCallum and his son, Stephen James McCallum, who died at birth, James is survived by his son, Michael McCallum of Roseville, CA, grandchildren Matthew McCallum and Elisabeth McCallum, sister Jeanne Seeger of Waco, TX and brother David McCallum of Coldspring, TX. Jim graduated from the University of Mississippi in 1961 and earned his MBA from the University of Southern California. He served over 20 years in the Air Force and retired at the rank of Lieutenant Colonel. After leaving the Air Force, Jim went on to have two additional careers in the defense contracting industry and as a stockbroker. Jim was a resident of Redlands for over 40 years, where he enjoyed golf, an active membership in the Redlands Sunrise Rotary Club and exploring local sites through day trips with friends.