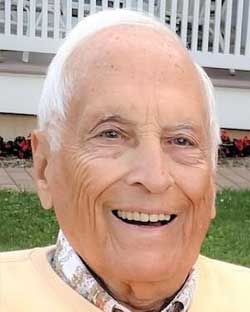 James Wilson Mead, age 89, passed away peacefully on July 15, 2020, with his oldest son, Chris, and grandson, Cooper, at his side at his son’s home in Orinda, CA. The son of the late Harris Delroy and Eleanor (Freling) Mead, Jim was born December 15, 1930 in Westfield, NY. He graduated from Westfield Academy and Central School in 1948, and received a bachelor’s degree in Management Engineering from Rensselaer Polytechnic Institute (RPI) in Troy, NY, in 1952, where he was a member of the Theta Chi fraternity and a Navy ROTC midshipman. He married his high school sweetheart, Jane Thompson, in Westfield’s First Presbyterian Church on November 22, 1952. Jim was an Ensign serving in the United States Naval Reserve at the time, and Jane was a senior at Cornell University. They had been married 67 years at the time of her death on February 6, 2020.

Jim then spent two years on active duty during the Korean War as the Supply Officer on the USS Brownson (DD-868), homeported in Newport, RI. He also spent another 18 years in the Naval Reserve, retiring in 1972 at the rank of Commander.

After his active duty in the Navy, Jim worked for three years as a plant management trainee for the National Gypsum Company in Clarence Center, NY, Baltimore, and Burlington, NJ. In 1957, Jim and Jane moved with their two oldest sons back to their hometown to begin the process of learning the newspaper and printing business. He worked on the staff of the Westfield Republican, the country’s first Republican newspaper and, in 1959, was named editor, only the sixth in 104 years. He served in that capacity for the next 22 years, following in the footsteps of his father-in-law and grandfather-in-law.

Jim was a tireless promoter of Westfield, both through his weekly column, “Main Street Notes,” and by acting on his belief that newspapers should emphasize local people and local events. According to the Buffalo Courier Express, he was credited with changing the image of the paper from a strictly Republican publication to one that limited its opinions to the editorial page. In 1981, the paper was sold to Ogden Newspapers, and Jim transitioned into the print brokerage business in Syracuse, until his retirement in 1996.

Jim served as member, director and, in 1976, as president, of the New York State Press Association, a statewide group representing nearly 400 weekly newspapers. He also was state chairman for the National Newspaper Association, and member and president of the Western New York Publishers Association.

A passionate believer in the power of volunteering and the obligation to contribute to the greater world, Jim spent his entire adult life in the service of others. An active member of Rotary International for more than 50 years, he was a past president of both the Westfield-Mayville and Fayetteville-Manlius Clubs in New York, as well as serving as Rotary District Governor in 1995 of District 7150, encompassing Syracuse and Utica.

Other community involvement included establishing the Westfield Counseling Service, a stint as Director and Treasurer of the Chautauqua (NY) County Association of the Arts, a term as president of the Westfield Chamber of Commerce, and a member of the Westfield Memorial Hospital Board. Jim also served 25 years on the Westfield Board of Public Utilities, including as chairman when the new wastewater treatment plant was built. He served six years in the Chautauqua County Legislature, including time as majority leader and chairman. He was committed to universal literacy, and served as a consultant to Laubach Literacy, which helped introduce about 150,000 Americans to reading each year and has grown to embrace 34 developing countries.

After a 2004 trip to Kenya, Jim and Jane raised funds to help establish the Bell House Academy, a trade school providing valuable life skills to boys and girls in Kenya’s Rift Valley.

In 1972, Jim and Jane purchased a cottage on the grounds of Chautauqua Institution where they lived nearly every summer of the rest of their lives. They spent winters in their home in the Coachella Valley (CA), starting in 1996 until the time of their passing.

Jane and Jim hosted many international students and visitors in the 1960s and 1970s including those from Rotary International, American Field Service and the Experiment in International Living. They visited and remained in contact with their exchange student daughters Arja Storm Van Leeuwen of Utrecht, The Netherlands, and Vicki (Creighton) Abbott of Narooma, New South Wales, Australia.

Jim was an ordained elder in the Presbyterian Church (USA), and helped found, along with his wife, the Spirit of the Desert Presbyterian Fellowship in Palm Desert, CA. He distributed food with Hidden Harvest until just months before his passing, and volunteered for the Alzheimer’s Association, and Mended Hearts, all in the Coachella Valley.

Jim loved reading, traveling, sailing on Chautauqua Lake, and a perfectly made Manhattan. He and Jane travelled extensively throughout Europe and the Caribbean. Their last international trip was for 18 days to Japan in 2016, to visit with a former exchange student, Hidenori Endo, when Jim and Jane were 85 and 84, respectively.

For more than 70 years, Jim was inseparable from his wife, Jane, and spending time with her, their four children and their spouses, and their eight grandchildren was paramount in his retirement years. He is survived by his children: Christopher (Gail) of Orinda, CA, Patrick (Amy) of Columbia, MD, and Peter (Denise) Mead, of Columbia, MD, and Elizabeth (Stephen) Mead Fox of Sandwich, MA. He also is survived by his grandchildren Helen, Carson, Cooper, Augusta and Maura Mead, and William, Patrick and Christopher Fox, as well as several nieces and nephews. He is survived by his sister, Loretta Mead Peckham of Washington Township, MI, and was preceded in death by his beloved wife, and by his parents, Harris and Eleanor, and his sister Virginia (Mead) Hoyt.

There will be a joint monument for Jim and Jane in the Westfield Cemetery, in the Thompson family plot. A service of remembrance, celebrating both their lives, will be held at the Presbyterian House in Chautauqua Institution during the summer of 2021.