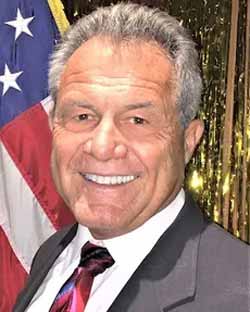 James Edward Miller was born on September 13,1953 in Aurora, IL and passed away in Rancho Mirage, CA on July 23, 2022 at the age of 68 surrounded by loved ones. He moved with his family to Palm Desert, CA in 1967 and attended Indio High School and College of the Desert. He was preceded in death by his parents John and Lois Miller and older brother John Miller II. Jim proudly served his country in the United States Navy aboard the USS Blue Ridge LCC-19. He served two tours of duty traveling to Vietnam and participating in Operation Frequent Wind, the evacuation of Vietnam. He was Honorably discharged in 1975. He began his career with the US Postal Service in 1978 where he served in many Postmaster positions throughout the Coachella Valley, finally achieving the position of Manager of Post Office Operations for the San Diego District before he retired in 2010. He continued his public service as the first Reserve Deputy in the Coachella Valley with the Riverside County Sheriff’s department. He was a long-standing member of the Indio Elks Lodge #1643 and held many positions including Exalted Ruler and Grand Lodge Public Relations Chairman. He was honored as Officer of the Year and served on the House Committee, the South District Drug Awareness Chair and Esquire to the DDGER. He moved on to become the Association Vice President from 2015-2016 and then District Deputy Grand Exalted Ruler from 2016-2017. His last position was working with the Public Relations Committee for Area 7. He entertained us with his musical talent and great sense of humor and was always the life of the party. While he was accomplished in so many aspects of life, his proudest was his family. He is survived by his wife Michelle Solvin, sons Jacob Miller (Amanda) and Justin Miller, sister Linda Sayer and grandchildren Jemma, Lexi, Jett and Jace Miller. Jim will long be remembered and deeply missed.