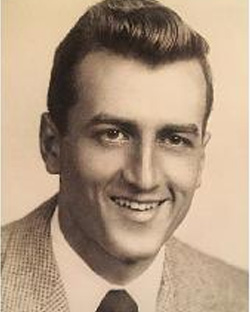 James A. Oliver, age 91, passed away on November 7, 2019 in Corona, CA with his family by his side. He was born in Oakland, Maine where he grew up and graduated Valedictorian of his high school class. He has lived in Corona, CA for the past 41 years, and previously in Delaware, Ohio and Pearl River, NY.

He served in the U.S. Army as a Second Lieutenant, post WW ll, in Germany. He was self-employed at Jarsco Engineering and retired from Bechtel Corporation. He earned his Bachelors in Engineering from University of Maine, and Masters degree in Electrical Engineering from Brooklyn Polytechnic Institute. Renowned in his field, his work took place throughout the United States, Europe, and Asia.

He received many honors and engineering awards through IEEE (Institute of Electrical and Electronic Engineers), and CIGRE – International Conference on Large High Voltage Electrical Systems. He was a parishioner of Saint Edwards Church, Corona, CA. His faith guided him through his life. He loved the holidays, family gatherings, and the time he could spend with family during summers in Maine, at North Pond.