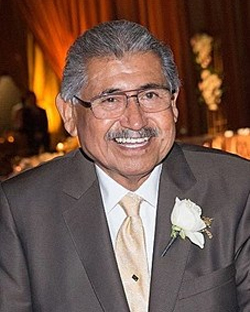 April 23, 1941 – September 8, 2022 On the morning of September 8, 2022, James "Jaime" Ramos, the patriarch of the family, began his journey home. He was surrounded by his beautiful wife of 57 years and his children whom he proudly called his four aces. In the weeks prior to his journey he was flooded with love from all 34 grandchildren and that made him happy. He dedicated his life to loving and teaching his family to take care of each other and to always help others. His smile was contagious and his humor was unmatched. His hugs always left you wanting more. He was a prankster and loved music, fishing, the Rams, the Dodgers, jelly donuts, pancakes, family bbq’s, old western movies and spending time with his family. He was a classic car enthusiast and loved to go to car shows with family and friends. He felt his job in life was to make sure we never lost our sense of humor and to find something to laugh about everyday. His faith in God was strong and he prayed and listened to worship music daily. He would always tell his children and grandchildren, when they came to him for advice, to pray before they made any plans or took any action. He proudly served in the United States Army from 1962-1968 and was a certified Marksman. He was a member of the American Legion Post 421. He retired from the San Bernardino City Schools. After retiring he and his wife began a legacy of philanthropy to help local community charities and organizations. He supported many non-profits, such as the Unforgettables Foundation, Time for Change Foundation, SEBA charities, LLUCH and many more. He had a special place in his heart for Veterans and children and would help where he could. He loved and cherished his beautiful wife, his queen, and made sure she had everything she wanted or needed. He supported all of his grandkids sports, dance recitals, piano concerts, school functions, plays, and any causes that they believed in. He was born and raised in the little village of East Highlands and was the youngest of 9 siblings. He was preceded in death by 7 of his siblings with his sister, Antonia Paramo, passing only a few months before and with their last conversation they lovingly said, "I will see you in Heaven". He is survived by his brother, Santos Ramos; his beautiful wife, Rowena "Rena" Ramos; his four children, Ken (Sean), Alaina, James "Chico" (Terri) and Tommy (Maria); his 17 grandchildren; his 17 great grandchildren and many nieces, nephews and cousins along with a plethora of extended family and friends. He was given the name, "Flys With the Wind" jokingly, and he was proud of it. He will be missed beyond measure and this world will never be the same. Viewing, Tuesday, October 4th from 4pm-8pm at Mt. View Mortuary. Funeral Mass, Wednesday, October 5th at St. Adelaide’s Church, 27457 Base Line St., Highland, CA 92346 at 10am with a burial to follow at San Manuel Cemetery.