Written by Night For Vets on March 17, 2021. Posted in Gone But Not Forgotten 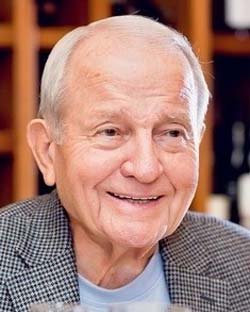 James Knox Reynolds, known to friends as Jim, of Scottsdale, AZ, beloved husband and best friend of Betty (McMann) Reynolds, passed away peacefully on January 27, 2021, at the age of 90 years. He was surrounded by the ones he laughed with, lived for, and loved. He was predeceased by his five brothers, Stanley Gilbert Reynolds, Newell Taylor Reynolds, Francis Wayland Reynolds, John Oxenbridge Reynolds, and Harold Youmans Reynolds Jr. He was also predeceased by his parents Harold and Elizabeth. James was born in San Diego but spent most of his childhood living in Redlands, CA. Following his four older brothers’ Naval service during world war II, James served in the US Navy after high school graduation. He completed his degree in Agronomy at the University of California, Davis, where he played football and was an Alpha Gamma Rho fraternity member. It was at UC Davis where he met the love of his life, Betty. After marrying, James commenced his career, working for Del Monte for four years on Molokai, HI. He then pursued a lengthy career with DuPont, which resulted in his family residing on both coasts in the USA. He also took his family along when DuPont transferred him to Tokyo, Japan, and Geneva, Switzerland. After a 29-year worldwide career with DuPont, James retired and started his own consulting business, Agriventures, Inc. This second career lasted for over 20 years. He enjoyed advising various global enterprises that benefited from his recognized negotiation skills and sales/marketing experiencenotably, Gowan Co, I.Pi.Ci. SPA, MESEI & Company, Ltd., and PHT International Inc. James retired, for the most part, in 2008. Jim’s witty humor and positive influence was appreciated wherever he traveled. He enjoyed sing-alongs and playing the ukulele, guitar, and piano. He loved a good nap, often. Watching football was a favorite pastime. There are also many adventures on the golf course that family and friends will recall. Jim will be forever remembered by his wife Betty of 65 years and his children, Marcia (Michael), Robert (Patrice), and Nina (Jeffrey). Papa Jimmy also leaves behind eight precious grandchildren, Forrest (Lindsey), Grace (Berkeley), Waverly, Robbie, Faith, Marlena, Mackie, and Owen, and the following great-grandchildren Emily, Allison, and Robin. The family would like to express their sincere gratitude to the staff and community at Maravilla (Scottsdale) and Hospice of the Valley. We are incredibly grateful for Barbara Koss (Jim’s private caregiver). The devotion shown by all who cared for Jim is a heartwarming blessing. We thank God for the gift of Jim’s life and the time we spent with him.