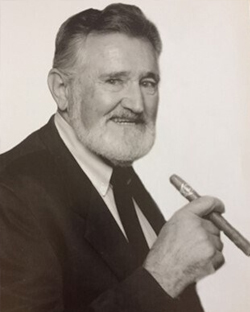 James “Jim” Robert Ron passed away peacefully at his home surrounded by members of his family on Saturday, August 1, 2020 just shy of his 90th birthday. Jim was born in San Mateo, California on September 19, 1930. He graduated from Burlingame High School in 1948, received a BS from the University of California, Berkeley in 1952 and a JD from Hastings College of the Law, San Francisco, California in 1955. After graduation from law school, Jim joined the U. S. Army and served most of his time in Germany. He received an honorable discharge.

He was a member of both the California and Ohio Bars. During his working life he was employed by the Internal Revenue Service in Washington, DC, Marathon Oil Company in Findlay, Ohio, Litton Industries in Beverly Hills, California and for over twenty years as General Tax Counsel at Occidental Petroleum Corporation in Los Angeles, California.

Jim and Sheri were married on February 4, 1989 at their home in Cheviot Hills, California. He is survived by his loving wife, five children, their spouses, twelve grandchildren, seven great-grandchildren and nieces and nephews. He was predeceased by his parents, J.V. and Amadora Ron and his sister, Auria Ron Gishe.

His grandchildren dubbed his obituary as “The Story of the Most Interesting Man” – Jim was a devoted husband, father, grandfather and friend. He loved his family and friends and was always there for them. Jim and Sheri’s retirement days were spent traveling the globe together. Later he enjoyed playing Dominos, sipping a glass of Jameson and smoking a cigar with his friends.

While he will be missed, he will most certain always be remembered with love, affection and by his countless acts of kindness. He was a very thoughtful man whose accomplishments and generosity will be remembered for many years to come.