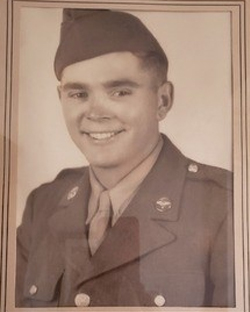 My name was James F Stembridge. I was a first-generation Californian having been born in San Bernardino on 11/11/1920; as luck would have it, I missed my 100th birthday by only 5 months. But between my dates of birth and death, I lived a pretty good life, and I was in fairly good health up until 2/2014 when dementia started to take its toll on me. Before that, I had lived independently in Kernville, Ca. I had moved there from San Bernardino in late 1989 with my beloved wife, Goldie, to whom I was married for 70 years. She had passed away at age 88 in 4/2011. We had known each other since she was 14–I was 16. I lived there by myself up until 2/2014 when I had to go into a facility. I later transferred to the Katherine Convalescent Hospital in Salinas, Ca in 6/2014 and then I went on to Brookdale Senior Living also in Salinas, Ca where I passed from this existence into the next on 6/19/2020. I will be returning home to San Bernardino, and I will be laid to rest next to my darling Goldie at Montecito Memorial Park, 3520 E Washington St in Colton on 6/29/2020. But first, there will be a viewing service at the Colton Funeral Home, 1275 N La Cadena Dr, Colton at 10:30 11:30 AM that same day. There will then be a graveside service at Montecito at 12:00 Noon. I loved to fly, and I had a pilot’s license before I had a driver’s license. When WWII started, I enlisted into the Army Air Corps as a technician replacement. I serviced all the mechanical parts of the B-29 Flying Fortress. I was stationed in India and later on the Island of Tinian; I was there when the Enola Gay delivered the atomic bombs to Hiroshima and Nagasaki. I was eventually promoted to tech sarge. I was discharged at war’s end in late 1945. Goldie and I had two sons: Charles whose wife’s name is Rose; and James whose wife’s name is Joan. I currently have four grandchildren: Tara, Justin, Maren, and Philip. I have 18 great-grandchildren. It’s not every day that a person gets to see his children’s children’s children! After the war, I worked with my brothers in what was then considered a grocery supermarket. My brother Austin and I later built Stembridge Hardware in 1953. The building and shopping center we built still stands at 160 E Highland Ave in San Bernardino. We sold the hardware store in 1966. I loved to build. I built cabins in Crestline and Running Springs. I built and flew my own airplane. I built and restored several boats. I built several muzzle loading rifles. I made two telescopes in the 50’s. I restored and modernized an old two-story house in Highland where I owned a 5-acre orange grove. My hands were never slack, and I wish the same for all of you. Good bye; it was a wonderful journey.