Written by Night For Vets on July 17, 2019. Posted in Gone But Not Forgotten 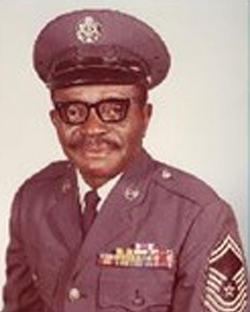 Jeff Davis White, Chief Master Sergeant, (Ret.), 98 passed on peacefully at his Riverside, CA home on June 30, 2019. A veteran of World War II and the Vietnam War, Jeff served his country honorably in both the United States Army and the United States Air Force.

Chief Master Sergeant White was born March 25, 1921 in Jacksonville, NC to John Thomas White and Elmira (Bradley) White. In 1942, he joined the United States Army. Upon graduating from special training in tactical policing, he was sent east to Newport News, VA and then on to Oran, North Africa. There he boarded a British ship to India as a part of the 45th Engineer Regiment to aid in the construction of the Ledo Road; an important supply route during World War II and the Second Sino-Japanese War. After completing his service with the Army, Jeff moved back to Norfolk, VA. In 1947, after a year of civilian life, he enlisted in the United States Air Force.

Jeff was based at Carswell Air Force Base in Texas and while out with friends, he met "the love of my life", the late Clara Jo White. They were united in matrimony on May 5, 1950 and were married for sixty-four years, until Clara Jo’s passing on May 7, 2014.

Jeff retired from the military after 30 years, to Riverside, CA where he pursued his many interests; two of which were gardening and woodworking. His gardening skills were legendary from tending various fruit trees to exotic vegetables. He crafted extraordinary furniture from his favorite woods’ mahogany and redwood.

He loved jazz music and would spend hours with his beloved Clara Jo listening to their favorite musicians.