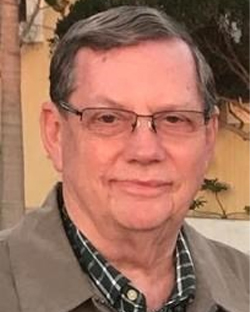 June 13, 1943 – June 9, 2022 Jeffrey R. Nelson passed away peacefully at his home on June 9, 2022 in Riverside, Ca. after a long struggle with cancer (multiple Myeloma). Jeff was born in St. Paul, Minnesota June 13, 1943 to Robert O. & Muriel E. Nelson. Jeff was the oldest of three sons. He lived in several places due to his father’s service in the military. He graduated from high school in Maryland 1961. Soon after his father retired from the service and the family moved to Riverside, Ca. When arriving in Riverside Jeff applied for a job at The Wall Street Journal on Jurupa Ave. at the age of 18. He got the job, which started his career with the WSJ for 26 years, & took him and his family across the U.S. to Chicopee, Mass. to their National Circulation Offices. In 1966 he married his love & friend, Dorene (Blomquist) Nelson. They were married 55 years & had 10 children. In 1988 he retired from the Journal & returned to Riverside, Ca. In 1990 he obtained a second career with the County of Riverside Probation Dept., employed 19 years. Retired 2009 from the County. Jeff served 2 years in the U.S. Army, a Vietnam Veteran. He was an active member of The Church of Jesus Christ of Latter-Day Saints. Jeff is survived by his wife Dorene & 9 children, Kristin Meza (Mike), Jill Nelson, Mark Nelson (Erin), Angela Christensen (Cory), John Nelson, Paul Nelson (Brandy), Laura Jones (Paul), Andrew Nelson (Trena), & Michael Nelson (Lisa); 37 grandchildren; 4 great grandchildren & his brother Wayne Nelson. He was preceded in death by his daughter Candyce J. Nelson; parents, Bob & Muriel Nelson & his brother Clifford Nelson.