Written by Night For Vets on June 25, 2021. Posted in Gone But Not Forgotten 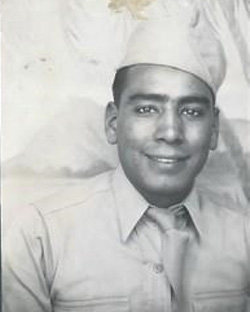 July 20,1922 – May 25, 2021 Jeronimo (Jerry) G. Sanchez Jerry G. Sanchez, 98, died peacefully in his home on May 25, 2021, his youngest son Mark, was by his side, his beloved wife Catherine, passed away on December 14, 2019. Jerry was born in Jerome, Arizona but grew up in the small community of Casa Blanca in Riverside, Ca. Jerry was known by the nickname Momo by many relatives and friends. He proudly served his country in World War II, taking part in the Battle of Saipan as a Surgical Technician/Corpsman and as a sharpshooter. He worked for many years at Naval Air Station, North Island in San Diego, Ca. as a Sheet Metal Worker and retired from there after years of service, earning many awards and commendations, he was a long-time resident of Chula Vista, Ca. He is survived by four sons, Mike, Charles, Jerry and Mark, two daughters, Monica, Barbara and many grandchildren and great grandchildren.