Written by Night For Vets on June 17, 2022. Posted in Gone But Not Forgotten 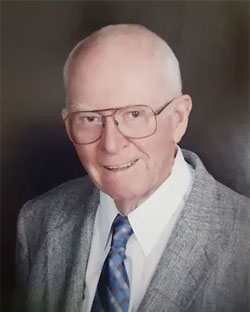 Jimmie was born April 27, 1929 in Fullerton, CA and soon-after his family moved to Biola, CA. He married his first wife Joyce McElwee in 1959, who presented Jimmie with his only son James P. Martin.

Jimmie obtained his BS in Civil Engineering with a minor in Geological Engineering at U.C. Berkeley and did post-graduate work in Project Management & Organization at Stanford University. He held California contractor licenses in General Engineering and Building, and Hazardous Material Management. Jimmie’s construction projects included highways such as the original I-80 interstate through the Sierra Nevadas, airports, canals, dams, military installations including the Vandenburg AFB Launch facility, and major private developments including the Coalinga Downtown Mall.

Jimmie served in the US Marine Corps as a “Mustang” Captain. He served in China and was twice wounded in Korea resulting initially in paralysis which Jimmie was determined to overcome. After recovery he played 2nd and 3rd base and shortstop for a semi-professional baseball team.

Jimmie was a life-long model railroad enthusiast, often traveling to Barstow and other train station hot-spots to observe the trains and attend model railroading conventions. He accumulated an admirable collection of locomotives, car-stock and accessories for his favorite hobby. He also enjoyed the circus and would travel great distances to view shows and circus memorabilia at museums.

Jimmie passed away on June 1, 2022 and is survived by his wife Dolores Taylor of Ventura, CA ; his son James and James’ wife Jennifer of Nashville, TN.; his stepson Danny McCabe of Burbank; and former wife Peggy McCabe Martin of Palm Desert.